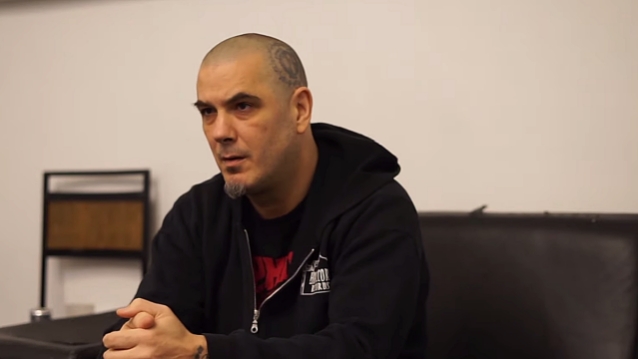 PHILIP ANSELMO On Hypothetical PANTERA Tribute Tour With REX BROWN And ZAKK WYLDE: 'If Everything Was Lined Up, I Would Do It'

During a recent interview with Chile's Humo Negro, Philip Anselmo was once again asked about his decision to play a number of PANTERA songs during the recent tour with his solo band, PHILIP H. ANSELMO & THE ILLEGALS.

"I couldn't do it with DOWN. I wouldn't do it with DOWN. I wouldn't do it with SUPERJOINT," he explained (see video below). "I didn't have the right people around me and the right circumstance, because… The last thing on my mind, before all this happened, was really playing PANTERA songs. We were gearing up to do a death metal run with THE ILLEGALS — little places — and then Vince [PANTERA drummer Vinnie Paul Abbott] died. And then it was, like, 'Fuck, man.' Things got important. Things got serious. And people started asking, 'PANTERA, PANTERA, PANTERA.' So I went to my band and I said, 'What do you think?' And they said, 'Let's try.' And as we went on, I realized this is pretty good; they play the songs very well. I mean, we had about a week to get ready for anything, man. So with each gig, it's got better and better and better and better. But in all truth, this is something that I never really thought about doing with any band, but especially THE ILLEGALS. Which, it makes me say, those guys deserve a lot of credit — they deserve tons of credit for learning all these songs. We didn't get together for them to learn PANTERA songs — we write our own songs. But the fact that they learned them, and they learned them so well… I love them. Big props to them."

According to Anselmo, one of the most gratifying aspects of performing PANTERA material with his current band is "seeing the younger generation" at the shows. "So that's why we do it now — for the younger people. Well, also the people that grew up with it. I guess I'm ancient enough to where I get to play for the 50-year-olds and the 15-year-olds now. So, it's pretty cool, man. It feels great. And especially seeing the young blood out there — people that never got a chance to see PANTERA. And you get to see these songs live. It's a great energy."

Asked if he would consider getting together with PANTERA bassist Rex Brown and performing the band's classic songs in concert, Anselmo said: "I'm open for anything. And Rex and I, we are in touch and we talk. We're friends and everything's cool. So, I keep an open mind — I keep an open mind. We'll see in the future."

Anselmo also talked about the possibility of a hypothetical PANTERA tribute tour with Rex on bass and Zakk Wylde filling in for the late "Dimebag" Darrell Abbott on guitar. "Well, Zakk is a busy man," he said. "He does his own band, he does stuff with Ozzy [Osbourne] and all that stuff. We spoke about it maybe one time. And I think everybody — everybody — is… I guess they're like me. Keep an open mind about it. We'll see. But I know from all the hard work with THE ILLEGALS here to make those songs right, all of us, we would have to take time off and really practice together and get everything perfect. So it's a lot of work. And I'm doing a lot of bands, man, right now. [But] if everything was lined up, I would do it — sure. Fuck yeah! Why not?"