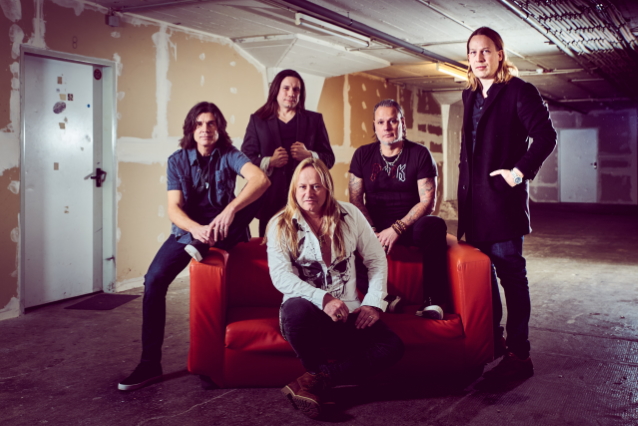 Commented founding member Alfred Koffler: "It wasn't a long search. And it was an easy decision. Marco is the perfect fit for the band — as a friend and as a musician. I can see only smiling faces in the band and around. Marco has been there for us years ago on tour with HELLOWEEN and STRATOVARIUS as a temporary replacement for Uwe and did a great job back then already. We remained friends ever since and he was the only call that we made when we knew we need a new guitar player."

Wriedt was a member of the German hard rock band AXXIS. He was also the driving force of 21 OCTAYNE, and was previously involved in the project ARC OF LIGHT. He is now working on his first solo album.

Added singer David Readman: "Last week we had a great first rehearsal with our two new band members. Some older songs as well as more recent material have been played through with happiness all over the place.

"Roman already helped out on bass and vocals at occassions when Dennis could not be there. He played festivals with us in Russia, Spain and the U.K. That worked out just perfect. An instant chemistry was there."

Beselt studied classical music, and the first album from his band SONS OF SOUNDS, in which he plays and sings with his two brothers, was produced by Readman.

PINK CREAM 69 is working on new material and is getting ready to perform at festivals like the Czech Republic's Masters Of Rock.

PINK CREAM 69 was founded in 1987 by singer Andi Deris, guitarist Alfred Koffler and drummer Kosta Zafiriou, who were later joined by Ward. Deris left the band in 1994 and after auditioning various singers was replaced by Englishman David Readman. In 2001, news emerged that Koffler suffered from focal dystonia, a serious disease that affected his left hand and his playing. For their live shows, the band recruited second guitarist Uwe Reitenauer to help out Alfred on stage, and he would eventually become a full-time member. Drummer Chris Schmidt would later step in after the departure of Zafirou in 2012.