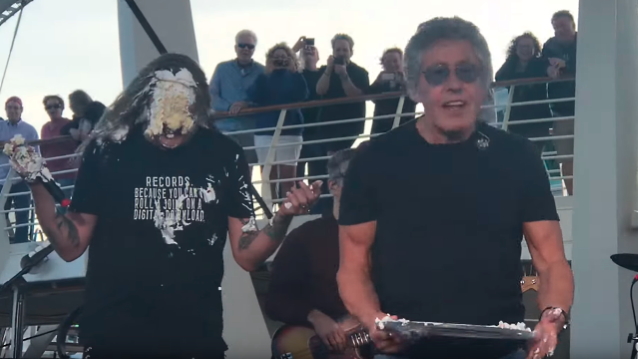 On his 76th birthday, THE WHO frontman Roger Daltrey was presented with a birthday cake by Sebastian Bach on the Rock Legends Cruise VIII on board the cruise ship Independence Of The Seas. After picking up the cake with both his hands, Daltrey proceeded to smash it in Bach's face (see video below).

The former SKID ROW singer appeared to laugh off the episode, telling the legendary rocker: "If you weren't Roger Daltrey, this would be a different situation. I love you. Do we love this man or what?"

When Daltrey celebrated his 75th birthday last year, Bach shared a photo of him with THE WHO singer on Instagram and wrote in an accompanying message: "I was lucky enough to meet Roger on the Rock Legends Cruise and was introduced to the Man by none other than one of the greatest drummers of all time, Artimus Pyle of LYNYRD SKYNYRD.

"Roger is a complete inspiration to every musician. As on this whole Cruise, there were no tapes, no backing tracks, every band was all live all real all the time. With Roger leading the way! He sang perfectly and was a Master with the mic swinging which made me nostalgic haha!

"When @artimuspyleband introduced me to Roger he said 'you know, I didn't realize how tall Sebastian was before I met him!' Roger said 'yeah, it's a crime isn't it' I said to Roger 'I love you so much man! I love your SCREAMS!' He laughed and said 'well, my balls sure don't!'"