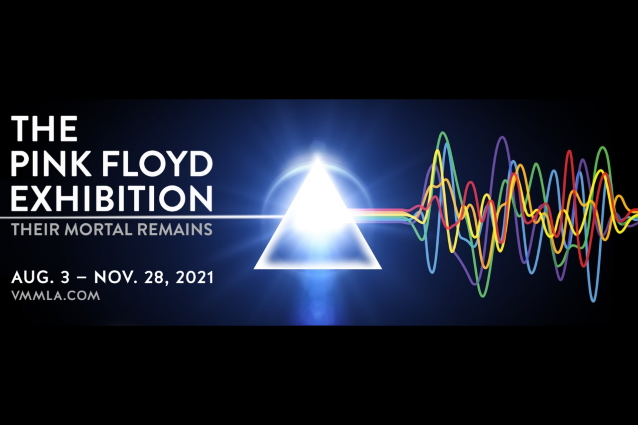 The United States has been confirmed as the fifth country to host "The Pink Floyd Exhibition: Their Mortal Remains", the critically acclaimed major retrospective of PINK FLOYD, their music, and the impact the band had on art and culture. Following its hugely successful debut at London's Victoria and Albert Museum in 2017, which saw over 400,000 people attend, the exhibition will now take residency in Los Angeles.

Crossing the Atlantic for the first time, the exhibition will open on August 3 at the Vogue Multicultural Museum on Hollywood Boulevard. This historical landmark is the perfect venue for the immersive experiential journey through PINK FLOYD's world, from high-tech audio-visual events, objects, and surreal landscapes that evolve throughout the exhibition. Tickets for the exhibition are on sale now. "The Pink Floyd Exhibition" is promoted by Michael Cohl of S2BN Entertainment, in association with L.A. event promoter Diego Gonzalez.

"I feel very proud to have the opportunity to introduce a new era of cultural exhibitions for the city of Los Angeles, especially with the timeless and legendary PINK FLOYD, a band so inspirational to myself and millions of fans all around the world for generations," said Gonzalez. "This exhibition will be a really exciting opportunity for people to come together to experience music, culture, design and innovation, all principles that PINK FLOYD represent in their music. I couldn't imagine a better exhibition to inaugurate the Vogue Multicultural Museum in Hollywood."

As the first location outside of Europe, Los Angeles is the ideal destination to host the exhibition as the band has a rich history with the city, having rehearsed and performed there on many occasions. PINK FLOYD's "The Wall" was completed and mixed in the famous city and in 1980 the group performed the first of 31 live shows at Los Angeles Memorial Sports Arena.

"The Pink Floyd Exhibition" is a collaboration between the members of PINK FLOYD and curator Aubrey "Po" Powell. Developed closely with Nick Mason (exhibition consultant for PINK FLOYD),the exhibition features over 350 artifacts collected over the band's extraordinary career. It is an audio-visual journey through more than five decades of one of the most iconic groups, and a rare glimpse into the world of PINK FLOYD. The exhibition is a collaboration with designers Stufish, entertainment architects, and the band's long-standing stage designers.

Each chapter of the PINK FLOYD story is represented, with objects and artifacts displayed, many unseen before the exhibition. There are handwritten lyrics, musical instruments, letters, original artwork, and many of the stage props. Some of these items have long been held in storage facilities, film studios, and in the personal collections of band members before being "dusted off" for the exhibition.

From the entry point into "The Pink Floyd Exhibition", the visitor is immersed in PINK FLOYD's world. They will find themselves transported to the band's beginnings in 1967 on the underground scene in 1960s London, including pictorial examples of the atmospheric oil and light projections as well as the equipment used by PINK FLOYD's 1960s-era lighting designer Peter Wynne Willson. You will be assailed by a chronological trip through PINK FLOYD's history, connecting with music, art and design, sound technology and live performance via landmark albums such as "The Dark Side Of The Moon", "Wish You Were Here", "Animals", "The Wall" and "The Division Bell".

Art and technology are celebrated, including an original painting by Syd Barrett, who studied art in London and Cambridge before becoming a full-time musician as well as a replica of the famed mirrored Fender guitar that Syd liked to play on stage and Syd's sketch of how he envisaged the first PINK FLOYD lineup. Also featured is the Azimuth Co-Ordinator, the custom-built device used by Richard Wright to pan the group's live sound, via a joystick, around any given venue. The Azimuth played an integral part in PINK FLOYD's theatrical live performances at venues such as London's Royal Festival Hall and Royal Albert Hall in the late 1960s as well as on the recording of the clock montage for "Time" on "The Dark Side Of The Moon".

PINK FLOYD's journey through the 1970s saw them embracing studio technology and using all the resources at their disposal at EMI's Abbey Road Studio on albums such as "Meddle", "The Dark Side Of The Moon" and "Wish You Were Here". Several instruments used in those years are displayed here, including Nick Mason's "Hokusai Wave" drum kit from 1975 and a selection of David Gilmour's equipment and artifacts, and Roger Waters's Ovation bass guitar from '74 – '78. Also included are PINK FLOYD's soundtracks for the art-house movies "More", "La Vallée" and "Zabriskie Point"; musical projects undertaken around their studio albums, and excerpts from the acclaimed PINK FLOYD 1972 film "Live At Pompeii".

The now world-famous artwork for 1973's "The Dark Side Of The Moon" was created by Hipgnosis, the design partnership founded by Powell and the late Storm Thorgerson. Hipgnosis's work is on display throughout the exhibition, alongside artwork and stage designs created for the band by others, including Gerald Scarfe (whose very first drawing of the band is included in the comic book program on display from 1974) and the late Mark Fisher.

These artifacts plot both PINK FLOYD's development as a spectacular live band and the broader social, cultural, and political threads which ran parallel to their music. Among the many artwork pieces on display is alternative imagery of architect Giles Gilbert Scott's Battersea Power Station, the building immortalized by Roger Waters's interpretation on the cover of PINK FLOYD's 1977 album "Animals", with the flying pig  Algie and the only remaining model sheep which was fired from mortars and parachuted over the audience during the '77 "In The Flesh" tour of the U.S.

In 1979, Waters conceived "The Wall", which explored childhood alienation, the Second World War, the loss of his father, through to the rites of passage of a rock star. The album's striking artwork and its grotesque cast of characters, including a huge inflatable cane-wielding schoolteacher, were created by cartoonist and illustrator Gerald Scarfe. Also, some of Roger's original biro sketches and lyrics for "The Wall" accompanied by a mannequin cloaked in his black leather coat and megaphone from the 2010/2013 "The Wall" shows.

These characters were then re-imagined by Mark Fisher as huge inflatables in the subsequent "Wall" stage show, some of which have been re-created by Stufish and will feature in the exhibition. Included in the exhibition are the cane used by the headmaster at the Cambridge and County High School for Boys on his pupils, Roger Waters, Syd Barrett, and future collaborator Storm Thorgerson and a punishment book detailing the dates and reasons for the beatings, all inspiration for the schoolteacher character and the song "Another Brick In The Wall Pt. 2".

Later in 1987, PINK FLOYD returned to Los Angeles to record their debut album without Roger called "A Momentary Lapse Of Reason". The scale and ambition of PINK FLOYD's imagery and live shows continued from the late 1980s and mid-'90s with world tours for the "A Momentary Lapse  Of  Reason" and "The Division Bell" albums. The exhibition salutes this scale and ambition with specially reconstructed suits of lightbulbs worn by two mannequins mimicking the cover of the 1988 live album "Delicate Sound Of Thunder", which was photographed near Madrid in 1989, and the giant metal and stone "talking heads" conceived by Storm Thorgerson for the sleeve of 1994's "The Division Bell".

The flow of the exhibition, in chronological order, is enhanced throughout by music and the voices of past and present members of PINK FLOYD, including Syd Barrett, Roger Waters, Richard Wright, Nick Mason and David Gilmour, talking about their experiences and musical experimentation via an intuitive audio guide system. This culminates in the Performance Zone, where visitors enter an immersive audio-visual space, which includes PINK FLOYD classic tracks as well as the recreation of the very last performance of David Gilmour, Roger Waters, Richard Wright and Nick Mason, performing "Comfortably Numb" at Live 8 in 2005. 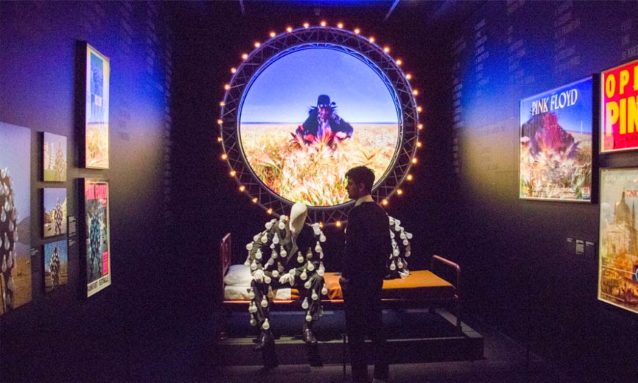 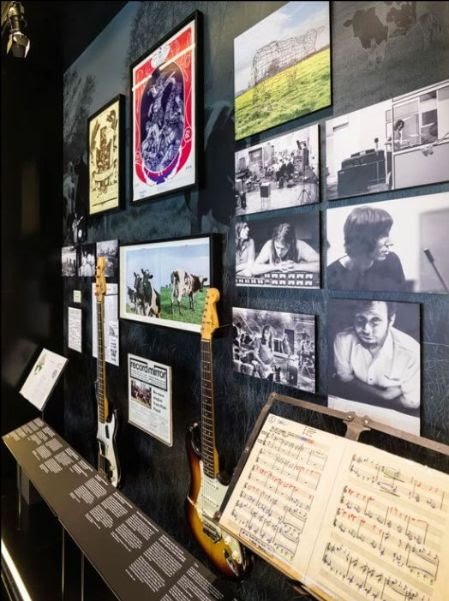 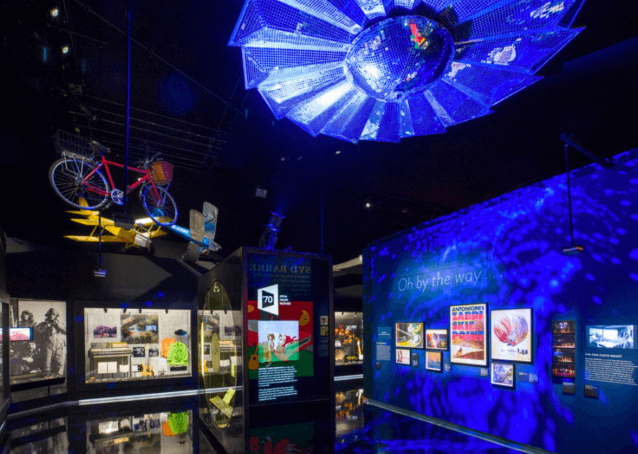 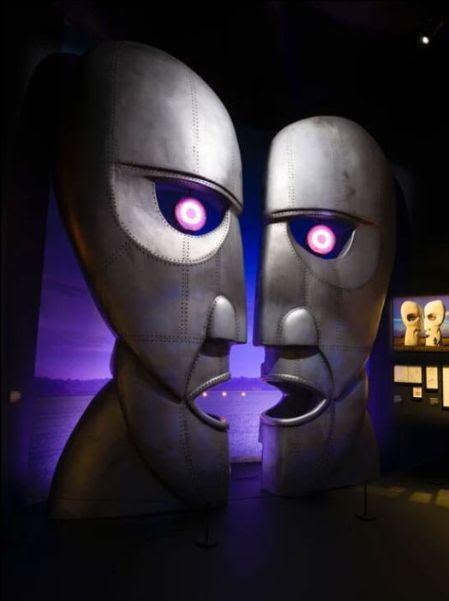