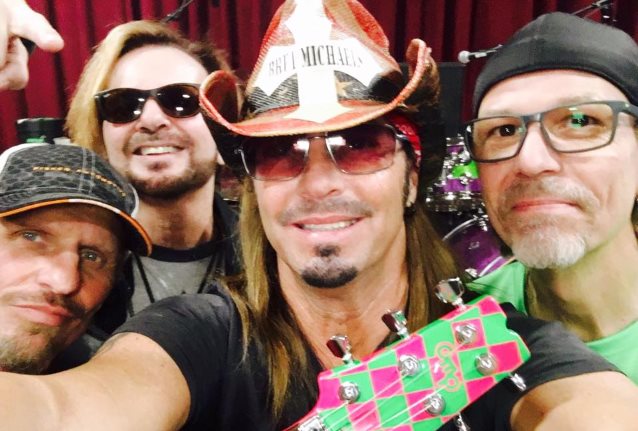 POISON singer Bret Michaels has released the first photo of the band's original lineup as it begins rehearsing for its upcoming tour. He wrote in the accompanying caption: "Rocking hard, feeling great. Haven't killed each other yet, this tour is happening. #music #poison #tour #springbreak #party"

POISON will perform all its greatest hits as they headline select dates for the first time in over a decade. This spring will see all four original members — Michaels, Bobby Dall, Rikki Rockett and C.C. DeVille — join together to play these limited headline dates in the U.S. and Canada.

The dates will coincide with POISON's co-headlining tour with DEF LEPPARD and special guest TESLA throughout the spring and summer. The first POISON headline date will be Raleigh, North Carolina on April 28, followed by Charlotte, North Carolina on April 29. Huntington, West Virginia (May 7),Albany, New York (May 9),Rapid City, South Dakota (May 26),and Grand Forks, ND (May 27) have all been added as stand-alone headline dates with several more in the works.

Although they have co-headlined in the past with DEF LEPPARD, MÖTLEY CRÜE and KISS, to name a few, these will be POISON's first headline dates in select markets in over ten years.

Stated Michaels: "I'm really looking forward to the POISON tour. It's going to be incredible playing all the hits and putting on a hell of a high-energy rock show for the three generations of awesome fans."