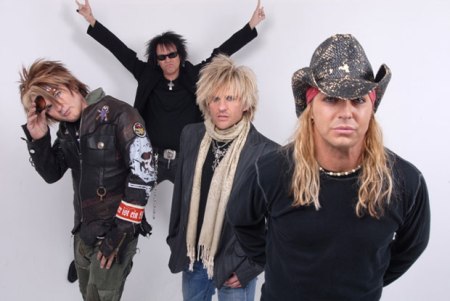 POISON's BRET MICHAELS: 'I Still Play Music For The Love Of It'

Christina Fuoco-Karasinski of SoundSpike recently conducted an interview with POISON singer Bret Michaels. A couple of excerpts from the chat follow below.

SoundSpike: You must be excited about the tour with MÖTLEY CRÜE and NEW YORK DOLLS. Music by all three acts still sounds timeless.

Bret: Thank you very much. You know what's fun about that, too? That's the one thing that our band — whether it's my band or me with POISON — we really spend days and days and sometimes a month just rehearsing, getting the sound down. The most important thing you want is the music to be great. You want fans to go, "Wow. That sounds like the album. That sounds good." That's what we strive to do. When we get on the stage, [there's that] combination of the big stage show and I call it "natural energy." I'm so passionate. I still play music for the love of it. Sometimes, I just think about the opportunity that fans have given me to be able to go on a stage 25 years later living out my dream. That's an exciting day for me.

SoundSpike: What can we expect from the set list with POISON?

Bret: I promise you this: All of the greatest hits for sure and we're going out supporting a brand new greatest hits collection called "Double Dose Of Poison". The show we've been working on, I've been putting together the visual of the show and putting together the look and the feel and the lighting and all that stuff. Combine that with C.C. [DeVille], Bobby [Dall], Rikki [Rockett] and I playing all the greatest hits, and it's just going to be an amazing, an amazing show.

SoundSpike: Have you started rehearsals yet?

Bret: Mid-May. But I'm making history this year. I'm playing first as a solo artist — ready — then POISON kicks off. We kick off our 25th anniversary on the 25th of May in Tupelo, MS, at BanCorpSouth Arena, just as POISON. Then we do Rocklahoma and then Little Rock['s Riverfest]. All these big shows we're doing, we're probably doing two to three weeks as POISON alone and then we join MÖTLEY CRÜE and go out for the rest of the summer. Think about this, I'm going to be able to do solo, POISON and a POISON-MÖTLEY tour all in one year. That has to be history making in some weird way.

Read the entire interview from SoundSpike.