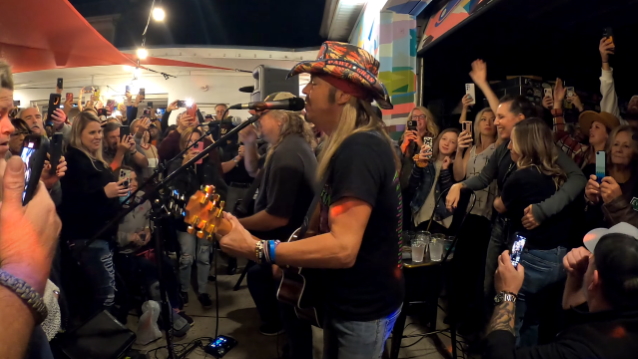 According to Potomac Local News, POISON frontman Bret Michaels played an unannounced set in Virginia this past Saturday (October 22). Bret's performance took place at the Sinistral Brewing Company in Manassas, where Pete Evick, the guitarist of Michaels's solo group, was scheduled to play.

Bret was traveling with Pete, founder of Manassas-based Shining Sol Candle Company, to work on some music projects in Manassas and asked if he could join him for a few songs during his set. Manassas is also home to a few other members of Bret's solo band — Norman Voss, Becci Clark and Kara Davis.

Michaels played a couple of classic POISON songs, including "Every Rose Has Its Thorn" and "Nothing But A Good Time". He also posed for photos with fans.

POISON's long-delayed North American trek with DEF LEPPARD, MÖTLEY CRÜE and JOAN JETT & THE BLACKHEARTS was originally planned for 2020 and later moved to 2021 and then to 2022. "The Stadium Tour" concluded on September 9 in Las Vegas, Nevada.

During a recent appearance on SiriusXM's "Trunk Nation With Eddie Trunk", Bret revealed that POISON fans may have to wait until 2025 to see the band perform again after "The Stadium Tour". Asked by host Eddie Trunk to elaborate on his touring plans for the foreseeable future, Bret said: "For me, next year, I put it off this year, because we didn't know this year… With everything going on in the world, we didn't know if 'The Stadium Tour' was gonna go [ahead in 2022]. I prayed every day — I'm, like, 'I hope this goes. I've been waiting since '20.' First words out of my mouth besides thanking the fans and the bands and the crew, I go, 'I've been waiting two, almost three years for this' [since] we announced 'The Stadium Tour'. But for me, this year we were gonna do the 'Parti-Gras' tour. I put together something incredible, and now we're gonna launch that in '23. And when I tell you what this is and the way we've designed it with everybody, it's an incredible amphitheater tour that's just gonna be — I think it's gonna be insane and gonna be the 'all thriller, no filler' summer party. And you'll know what I mean when it hits the stage. It's really an exciting idea."

Asked if the "Parti-Gras" tour would include his own band or POISON, Bret said: "This would be my own band, in '23. I'm just saying '25 is probably when POISON will put a humongous world tour together and go back out and be incredible. And it'll be awesome. My 'Parti-Gras', this entire amphitheater thing we're doing and festival, as soon as we knew we were doing 'The Stadium Tour', we moved that to '23 and we got to do 'The Stadium Tour', which is incredible."

Regarding which other artists will take part in the "Parti-Gras" tour, Bret said: "We [already] know [who it is]; we just don't wanna say it yet. When you see the concept I wrote up… Like I said, it's all-thriller, no-filler, all-original-singer, nothing but hits that just is gonna roll. Truly when I use the words 'nothing but a good vibe' or 'nothing but a good time', it is gonna be that kind of night. And we're only pick select dates in all the amphitheaters, Live Nation amphitheaters, and then take it out to the festivals and everything along with it."