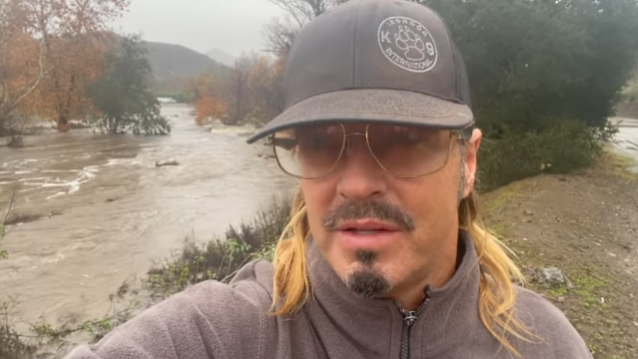 POISON frontman Bret Michaels, who resides in Southern California, has shared video of the flooding in and around Los Angeles this morning.

In one of the clips, which can be seen below, Bret can be heard saying: "Yesterday we had a little rain and barely a dry creek bed with a trickle. Now it is a mass flood. Half these people can't even get across or through their driveways. I'm gonna go see if I can help 'em out. Everyone, if you're in L.A. county, stay safe."

Heavy rain in the Los Angeles area has prompted mudslides, debris flows and flooding, with downpours expected to taper off in the afternoon. Conditions will dry out for the weekend.

A winter storm warning took effect at 1 a.m. Wednesday and will remain in place until 4 a.m. Friday in the Los Angeles County mountains, excluding the Santa Monica range.

Michaels is a passionate humanitarian and philanthropist. His Life Rocks Foundation supports organizations such as the ADA National Network for Americans with disabilities; JDRF, the world's largest nonprofit funder of type 1 diabetes research; St. Jude Children's Research Hospital, veteran and pet causes and many more. Michaels most recently partnered with Arizona's HonorHealth Foundation to create an auction benefiting front-line healthcare workers and built a hospitality room at St. Joseph Barrows hospital for patients and their families during recovery where Michaels underwent surgery for a life-threatening brain hemorrhage and heart operation. Bret's oldest daughter, Raine Elizabeth, is a Sports Illustrated swimsuit model and university student and his youngest daughter, Jorja Bleu, has recently photographed with world-renowned photographer Jim Jordan and helped to co-write Bret's current single "Unbroken", which is dedicated to facing all adversity.