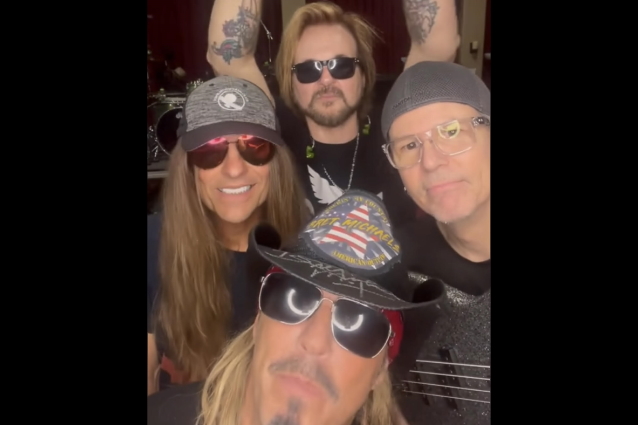 POISON's C.C. DEVILLE Shaves Off His Beard In Time For 'The Stadium Tour' Launch

POISON has shared a short video from the rehearsals for the band's upcoming "The Stadium Tour". The clip, which can be seen below, notably features a clean-shaven C.C. DeVille, less than a week after the 60-year-old POISON guitarist posted a photo of him sporting a full beard.

The members of POISON were once synonymous with androgynous, glammed-out hair rock, including such fashion choices as hair spray, lipstick and spandex. "It was a statement," bassist Bobby Dall explained to Miami New Times in a 2018 interview. "Back then, [the '80s] album covers were a huge ad. The cover of 'Look What The Cat Dragged In' made people stop and ask, 'Are they boys or girls?'

"We were glam from the start," he said. "People used to throw rocks at us, but we didn't give a shit. We had a vision. We didn't care what people thought of us."

In a 2000 interview with Orlando Weekly, DeVille said that he "always loved" POISON's image. "I always loved that pageantry of it all," he explained. "But you had to poke fun at yourself a little bit, because you didn't want to come off too strong, then they might be thrown off…. That whole androgynous thing was very cool, I always thought. But the thing is that if you're growing up in Montana and you have a tractor, I'm not too sure that they're gonna get it. But if you show a lot of boobs in the video — you make sure that you show a lot of girls in the video, so that the guys that are chewing tobacco don't feel alienated."

"The Stadium Tour", featuring POISON alongside headliners MÖTLEY CRÜE and DEF LEPPARD plus guests JOAN JETT & THE BLACKHEARTS, will kick off on June 16 in Atlanta, Georgia. The 36-date trek, which is due to wrap September 9 in Las Vegas, was originally scheduled to take place in the summer of 2020 but ended up being pushed back to 2021, and then to 2022, due to the coronavirus crisis.