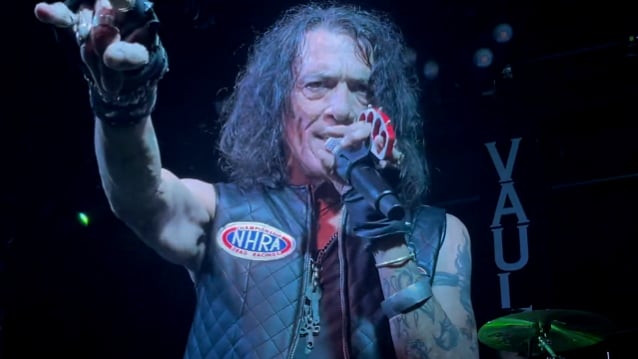 On June 6, the 20th anniversary of the passing of RATT guitarist Robbin Crosby, singer Stephen Pearcy spoke to Atlantic City Weekly about his late friend, the glory days of RATT and his plans to continue touring with his solo band. He said: "As we celebrate Robbin's passing 20 years today, it's still Ratt & Roll. [The music's] got life … so we are kind of tripping in a good way. He was such an important part of the band. I knew we could play without him, but when he was gone, I knew the band was done. I knew we could go through the motions with different players, but I lost a real, true partner there — a driver in that machine. So, I continue to do the solo thing because I can write what I want and do solo records and tour when I want with who I want."

He continued: "We were supposed to do a big summer tour with RATT this year. I initiated doing something if the [surviving] guys [from the classic lineup] would get together. But there is no reason for them to do it or a need for them to do it, so I decided to just go out solo. And I am better off. Some of these guys [in my solo band] have been with me 18, 20 years. So if you want to Ratt & Roll, come see my shows."

Two months ago, Pearcy was asked once again during an appearance on SiriusXM's "Trunk Nation With Eddie Trunk" if there has been any movement with regard to reuniting the band's classic lineup. He responded: "Well, I will give you a bit of something. There was an opportunity presented to all of us. Besides [it being] a lucrative thing, it would be amazing.

"I mean, I will not do another RATT record unless it's all of us," he explained. "There's no reason; you won't get the RATT sound. We got close. And people, I think, got a little pissy at me for saying that about [2010's] 'Infestation' [album], [that] I really didn't think we hit a home run. Warren [DeMartini, guitar] and I basically handled that record, but [Carlos] Cavazo [guitar] was [also] involved.

"To me, you can put a label on it, but it's not RATT," Pearcy explained. "It's identifiable to the guitars and the whatever sound. We didn't get there. And also it had to do with… The mind that all of us were in at the time wasn't so together doing that record. But we did the best we could. So, for everybody who gets pissy about 'Infestation', I love that record… But you put a label on it, just because a label's on it doesn't mean it's RATT."

Asked point blank to explain to fans why a classic RATT reunion can't happen, Stephen said: "Looks, if the fucking components don't work, I'm not going out there with broken parts, nor am I gonna go out there and mislead my audience or our audience and rip 'em off of the true legacy of the band. Granted, no disrespect, [we've had] great players [in the band over the years], great humans and all this and that, but business aside… You've got it right here. You've got four of the original guys. I'm not wanting to go, 'Hey, guys. Come on.' Whatever. If it happens, it happens. I don't give a shit. And I can go out [with my solo band] and deliver the goods. Because it got to be a little convoluted with these different guitar players — that's where that 'no disrespect' comes — different guitar players or a different drummer or a different bass player. And it's, like, well, holy shit. It's gonna stop. And that's all I did was just say, 'Just stop for a second here, man.' And then out of the blue we were presented with this opportunity recently, and I'm thinking, 'Wow. Maybe this might… For shits and giggles, the guys might dig it, besides lucratively.' But it just ain't gonna fly. And that's where you just leave it alone — leave it alone. Sorry. But that's life, man."

Asked if there is a "lack of communication" between the members of RATT's classic lineup, Stephen said: "There's a lack of something, but it has nothing to do... If it had to do with business, I'm in. If it has to do with, 'Hey, you're copacetic and you just wanna kick back now and enjoy your life or what legacy you have,' well, that's all bitchin' too. So I have no qualms either way. I keep moving."

When host Eddie Trunk asked Pearcy if it's fair to say that some of the members of the classic RATT lineup are simply "checked out" and are no longer interested in playing with the band, the singer said: "It could be that. All I can do is make my own assessment of the situation. When you make a phone call and you get no response — and I won't say with who or what or where or when or why — fuck it. I don't care. We're all alive. We're all healthy. We're all groovy. I don't know. I hope everybody's cool. But I just got tired of people coming and going, and 'this is RATT' and 'that's not RATT'. Because we have a whole new audience — every day all these young people — and they see that marquee or they see that brand and they think, 'Oh, it's those five guys with that blond dude and that Warren DeMartini guy,' and then you pull in and you're, like, 'What the fuck? That's the singer guy.' So I just stepped out for a bit. And hey, it's nobody's fault but the way things just happened. A tour didn't go down [because of] COVID, this, that. And I went, 'I have no time for this' to start up again, to rehash or do something. So be it. Make whatever assessment you can. But I love that the opportunity was presented. And hey, let's hope. 'Cause I will not let there be another RATT record unless all of us are involved, so you probably will never get one. All I can do is give you some of the archives, which will happen soon enough."

In April 2021, Pearcy was joined by his former bandmate Bobby Blotzer during the RATT singer's livestream concert from the world-famous Whisky A Go Go on the Sunset Strip.

Pearcy and bassist Juan Croucier are the sole remaining original members in RATT's most recent lineup, which made its live debut in July 2018 in Mulvane, Kansas. Joining them in the band are drummer Pete Holmes (BLACK 'N BLUE, RATT'S JUAN CROUCIER) and guitarists Jordan Ziff (Marty Friedman) and Frankie Lindia (David Lee Roth).

RATT — featuring Pearcy, Croucier and DeMartini — played a number of shows in 2017 after reforming a year earlier in the midst of a highly publicized legal battle with Blotzer over the rights to the RATT name. They were joined at the gigs by Cavazo, who played on "Infestation", and drummer Jimmy DeGrasso, who previously played with Y&T, WHITE LION and MEGADETH, among others.