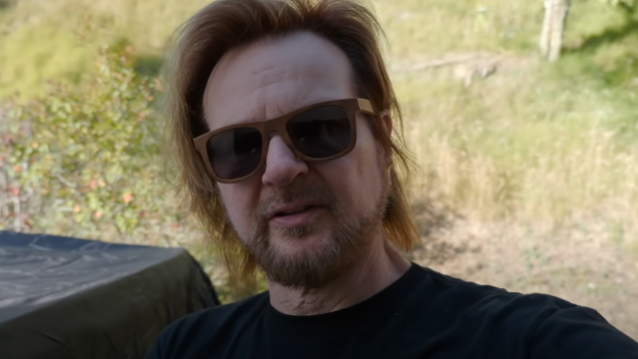 POISON drummer Rikki Rockett has lamented the fact that social media platforms are breeding grounds for the spread of fake news and misinformation, which also contributes to the political divide in the United States Of America.

Earlier today (Sunday, November 6),two days before the midterm elections, the 61-year-old musician shared a photo of an American flag on his Instagram and he included the following message: "I don't like talking politics, but it's all the rage these days I suppose!

"When I was growing up, my Moms side of the family were republicans and my Dads side were Democrats. We all shared holidays, birthdays and events. Did they argue? Sure, they did. What East coast family doesn't? But, at the end of the day there was a level of respect that we have lost today.

"The pot shots today are insane! Back then, the most divisive thing was probably Rock vs Disco! Lol! Now, people want a civil war if they don't get their way. Maybe DEVO was right about the future… Ju DeEvolution? Don't get me wrong, it can be healthy to be spirited about your beliefs. However, I now see people adopting beliefs simply based on the party they have chosen.

"I have gone from Republican to Libertarian to Independent in just a few short years. I care about policies, not parties.

"The current situation is insane and I blame social media. Social media has helped to create a culture war. At the heart of what people think is political is more a culture jam. Social media is the new propaganda machine.

"I personally don't care if someone in Iowa is out back shooting bottles and cans with their AR anymore than I care if some person in Chicago decides to identify as a different sex. Who gives a crap?! It's a problem when it's weaponized and used to hurt someone. That's when I think we as people should care.

"All this election stuff has me thinking… Do we have a Democracy anymore?"

Two years ago, Rikki decried the divisive nature of today's political scene in America after he was criticized for comments he made when it was announced the then-president-elect Joe Biden had won the White House. Rockett wrote: "I never speak of politics in interviews, onstage or at meet 'n greets. I keep it away from POISON. However, as an individual, I do have personal views and opinions. Don't want to know anything other than the man behind the drums? Fine, but this is MY page.

"If we were all sitting at a table having coffee, I doubt most of you would get up and walk away or if I was just a random friend, tell me to fuck off and would never deal with me again. If you did, you wouldn't be my friend or share my table in the first place and I wouldn't want to be at yours. Same goes here. If you don't like me as a person, I have no idea why you are here. I'll me and you do you. I am open minded, but I won't be bullied because you think since you bought a ticket or a record that I have to mute myself on my own social media pages so you don 't have to deal with a difference of opinion.

"I am not shoving my opinion down anyone's throat. This is my page and I have my views. I will not try and tweak my likes and dislikes to appeal to my possible 'demographic' so that I maximize my social media. Do you really want that from me? Do you want me to be that fake?"

Rockett's words were met with support from his social media followers, one of who said that she did not vote for Biden but that she thought it was "cool" that we will finally have a female vice president. Rikki replied: "I understand. It's why I voted for Trump in 2016. However, my taxes were worse! I am not a Democrat only because of taxes and Government interference too much. Socially... I am pretty liberal. I'm in a glam band for fucks sake! Lol".

This past September, POISON completed "The Stadium Tour" with DEF LEPPARD, MÖTLEY CRÜE and JOAN JETT & THE BLACKHEARTS. The was originally scheduled to take place in the summer of 2020 but ended up being pushed back to 2021, and then to 2022, due to the coronavirus pandemic.