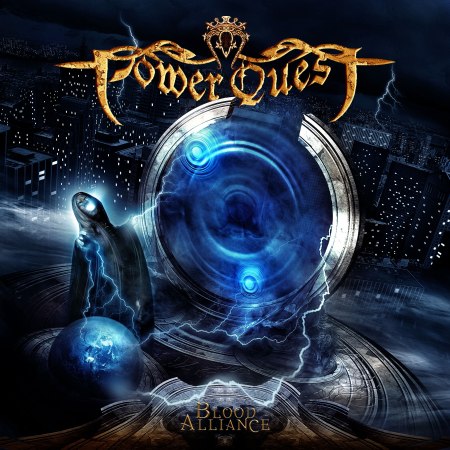 Mick The Beard of Metal Gods TV conducted an interview with U.K-based metallers POWER QUEST at the Hammerfest, which took place March 18-19, 2011 in Prestatyn, North Wales. You can now watch the chat below.

"Survive", a brand new song from POWER QUEST, can be streamed in the ReverbNation widget below. The track comes off the group's new album, "Blood Alliance", which was released last month via Napalm Records. Eleven songs were laid down at Foel Studios (PAUL RODGERS, NAPALM DEATH, THE WILDHEARTS) in Wales for the follow-up to 2008's "Master Of Illusion", including one bonus track. The CD cover artwork was once again designed by Felipe Machado (BLIND GUARDIAN, SILENT FORCE) and can be viewed below.

POWER QUEST in May 2010 announced the addition of vocalist Chitral "Chity" Somapala and guitarist Gavin Owen (of Welsh metallers TRIAXIS) to the group's ranks. The band stated at the time, "Chity is well known and highly regarded worldwide in the rock and metal scene and has recorded, toured and made guest appearances with the likes of AVALON, FARO, FIREWIND and RED CIRCUIT, as well as fronting his own band CIVILIZATION ONE. His unmistakable style has been compared favorably with Ronnie James Dio, Klaus Meine and Johnny Gioeli."