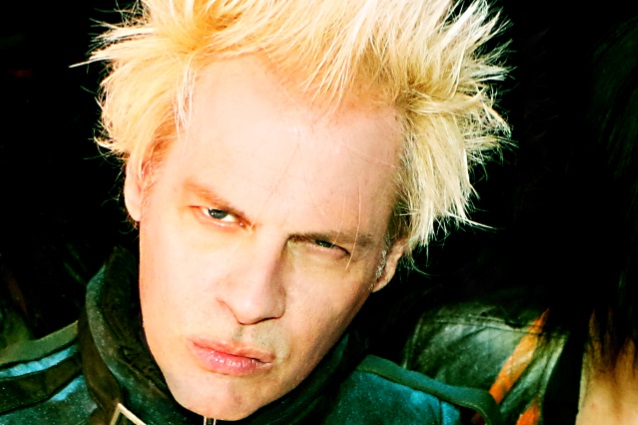 POWERMAN 5000 Frontman On Global Chaos: 'It Could Go Either Way'

Driver of the Lubbock, Texas radio station FMX 94.5 recently conducted an interview with POWERMAN 5000 frontman Spider One. You can now listen to the chat below.

Asked for his opinion on the "overall chaos" going on in the world today, Spider One said: "I'm a big science-fiction buff, and if you watch science-fiction movies, there's two kinds of futures: one that is just the apocalyptic, end of the world, we're all screwed; and then there's the other that's like utopian, beautiful society where we've figured out everything. I feel like we're right on that edge, where it could go either way — we're either doomed or we're at the point where maybe we're so close to being doomed that we'll figure it out and get it together. But your guess is as good as mine as to where it's gonna end up."

The second leg of POWERMAN 5000's U.S. tour in support of the band's latest album, "New Wave", kicks off in Lubbock, and makes its way through the southern part of the U.S., including two iHeartRadio shows (98 Rockfest and Earthday Birthday) in Florida, and ends in Flagstaff, Arizona.

Spider One told ArtistWaves about the lyrical topics covered on "New Wave": "I think the overall theme of this record is about trying to hang on to rebelliousness. Life, society and social pressure will suck the life out of you if you let it. Little by little, the fight is taken away from you. I think I was examining the idea of that and why most people let it happen. They give up or at least just give in."

Regarding the overall direction of "New Wave", Spider One said: "I wanted to make a record that I wasn't hearing in the rock world. I can't say I'm much of a fan of what I'm hearing these days. Rock has become pretty controlled. There is a very middle-of-the-road feeling I get from most bands, and lyrically, I hear a lot of generic sentiments. So, I guess, personally, I was frustrated and inspired to do something that went against all that."