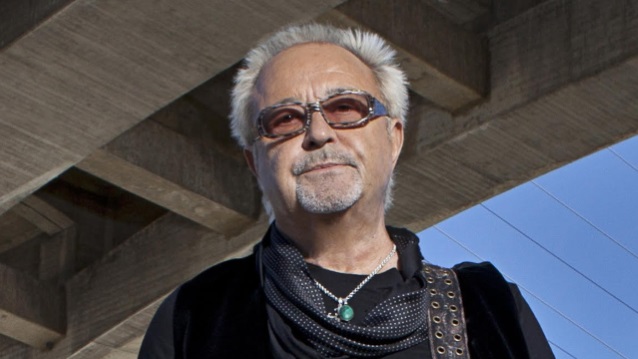 FOREIGNER founding guitarist Mick Jones was recently interviewed on "Rock Talk With Mitch Lafon". You can now listen to the chat below. A couple of excerpts follow (transcribed by BLABBERMOUTH.NET).

Mick: "It was something that Lou and I had… I think it began when we were inducted into the Songwriters Hall Of Fame a few years back. We got together. We decided to do a couple of the songs acoustically, and, quite honestly, it brought the house down. I think both of us, it made us reflect a little bit on what we had and the wonderful moments we've had together, and it was very emotional. And that's kind of where we picked up the relationship a bit more, after that, and gradually, we figured it would be great if we could do something like this for the fans, so we launched into it, and it was very successful. The band, the old and new members, got on like a house on fire, as did Lou and the current singer, Kelly Hansen. So it was kind of magical in a way. I just couldn't quite figure it. But it really did. And it really was very emotional and uplifting."

On having had the opportunity to work with Gramm and Hansen, arguably two of the best rock singers of all time:

Mick: "I'm very fortunate in that way. I think just the nature of the songs, the range it takes to sing them, and the depth, emotionally, to put them across, it almost requires more than one singer, in a way. But both of them could, obviously, carry the set. Lou and I, as I said earlier, [the Songwriters Fall Of Fame] made us think about things, and the thought about perhaps doing this [playing together again] on a bit more of a frequent basis, as the crowd seemed to enjoy it, everybody in the band enjoyed it, Lou, I know, had a ball. It's just funny how life takes these little twists and turns, and at the moment, we're on a good twist and a good turn."

On the possibility of recording new FOREIGNER music and having Gramm involved in its release:

Mick: "There are several ideas in the works. We've really just taken a sabbatical for the last few months, and we're getting back in the saddle, as it were, which we've been doing for the last few years. And we have a couple of tracks that we've had mulling around for a little while. And Lou and I have been listening to some old ideas that we had. There's a possibility or a chance of incorporating these in whatever format we decide to release it in. It might even be an EP. We're gathering material as we speak."

FOREIGNER will join forces with WHITESNAKE and JASON BONHAM'S LED ZEPPELIN EVENING for a 30-date summer tour that kicks off in Bangor, Maine on June 15.

On April 27, the group will release their first-ever orchestral live album, "Foreigner With The 21st Century Symphony & Chorus", via earMUSIC. The band will support the album's release this spring with ten live orchestral performances — eight in America and two in Switzerland.