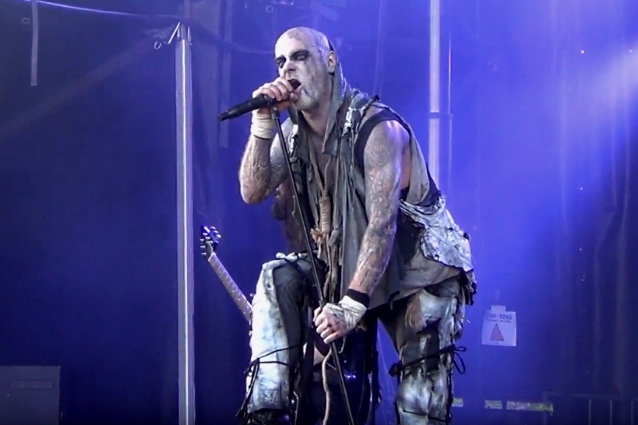 PRIMORDIAL Vocalist On Band's Writing Process: 'We Still Get In A Room, Argue And Shout And Piss Each Other Off'

Vocalist Alan Averill of the Irish folk/black metal band PRIMORDIAL recently spoke with Poland's Metalurgia. The full conversation can be seen below. A few excerpts follow (as transcribed by BLABBERMOUTH.NET).

On balancing his musical career and "normal life":

Alan: "The ideal situation would be able to play music and make a living from it, and be able to actually have a normal life but then be devoted to making music. In 2019, the amount of bands who are able to do that are very, very slim indeed, and they certainly aren't five-piece rock bands. Maybe for single electronic artists who are streaming millions of times, who make music on GarageBand, it might be possible to make a terrible living. The ideal situation would actually be the complete opposite, but that's not the way it is. People have different responsibilities, different lives. They have their own day-to-day [obligations] that they have to do, so the band has to work around that. On those terms, you have to consider that when PRIMORDIAL makes music, makes an album, comparing it to when bands were just fully able to devote themselves to music, you're judging things on the same standards as guys who are all working 9-to-5 and doing other things. It's just the way things are now. It's difficult, but at the same time, everyone has other things to be getting on with as well. It's a balancing act — but that's the same of everything in life, really, isn't it?"

On the band's musical consistency:

Alan: "If it's consistently very good or excellent... I like to think we have a very high [standard]. PRIMORDIAL's been going a long time. It's about quality, really, not quantity. It's a cliché, but we don't really have the time to do quantity over quality anyway, so it has to work when it needs to work. To be honest, we never sat down and made a plan. We didn't plan, 'Okay, this album's going to be this, and then in 12 months, it's going to be this.' Everything is very Irish. We just about skid in by the seat of our pants. Bad analogy, but it's sometimes a bit haphazard and a bit chaotic and a bit off-the-cuff. There's no grand plan, no grand design. Ciaran [MacUiliam, guitars] doesn't sit and plan everything out, and we don't discuss [goals]. It just sort of organically happens when it happens. That's always a bit more chaotic than maybe it happens for some bands. We don't trade files. We don't write remotely. We don't write on GarageBand. Ciaran doesn't send a whole song complete with a drum machine. We still get in a room, argue and shout and piss each other off. The only thing's that changed is the nature of the recording equipment, but it's still exactly the same as we did in 1991. That's really, I think, the way heavy metal should be made. I don't think you should be making heavy metal in a sterile, digital environment."

On whether the band has considered making an album that showcases their softer side, a la ELUVEITIE's "Evocation":

Alan: "A folk and acoustic album is something we've talked about. The rest of the guys maybe are more into Irish traditional music than me, but they could easily turn their hand to a very interesting, genuinely dark, Irish-themed, folkloric, mythologically based traditional album. I think they could do it, and do it really, really well. Simon [O'Laoghaire, drums] is a great singer — like, a trad singer. I think they can play different instruments. It comes back to find the time within all the other life responsibilities and mundane murky waters we all have to wade through to get to the other side of every day and pay the rent and the bills to actually find the time to go, 'Okay, this month, I'm setting it aside to do acoustic music.'"

On his lyrics, and the role religion plays in shaping his perspective:

Alan: "Sometimes, people take the lyrics I won't say too seriously, but a little bit too literally. Sometimes, it's poetry. I'm using biblical imagery to try and paint a sort of very dramatic picture similar to what we look back and see in these dramatic wood cuts and in these incredible engravings... I'm not Catholic. My ancestry, half of it is English and Protestant, which placed me growing up outside of Irish society looking in. There's an element of that [that] inform the lyrics. Growing up in a very Catholic country, but in different schools and different structures — growing up secular in a religious country. Sometimes, you have to look for a topic that will suit the drama of heavy metal, the pathos of heavy metal, so you need something which you can imbue within it the dramatic gesture, which is really important... We grew up in Ireland. We were teenagers in the '80s when the Catholic Church still had an immense influence on our society. The dark horror of the post-famine, 100-150 years of Irish society at the hands of the Catholic Church is pretty grim. There's no escaping that. Obviously, they were a target for us when we were writing songs 20-25 years ago, but the kind of anti-Christian, anti-whatever theme is done by most bands, so for me, I'd rather consider the 50 historical reasons or 500 reasons or whatever that got us to the situation as opposed to writing just about being anti-Christian or something, because that seems to be done to death in heavy metal. They don't need an anti-Christian song from me... I'm more interested in the history that brought us to this point, like after the famine in Ireland when literally, a country on its knees essentially handed over the organization and structure of its schools to the Catholic Church, which of course for the next 150 years basically became a very open pedophile ring. One thing leads to another, and what are the 100 reasons that land you in between?"

PRIMORDIAL's ninth album, "Exile Amongst The Ruins", was released in March 2018 via Metal Blade Records.