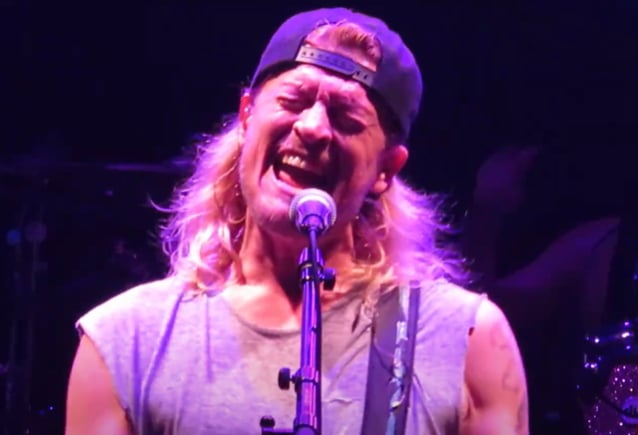 PUDDLE OF MUDD Releases Music Video For 'My Kind Of Crazy'

PUDDLE OF MUDD has released the official music video for the song "My Kind Of Crazy". The track is taken from the band's latest album, "Welcome To Galvania", which came out in 2019 via Pavement Entertainment. It marked PUDDLE OF MUDD's first full-length collection of new material since "Volume 4: Songs In The Key Of Love And Hate".

This past May, PUDDLE OF MUDD frontman Wes Scantlin told Reno's Rock 104.5 radio station that the follow-up to "Welcome To Galvania" was "basically pretty much done. I've just gotta polish it a little bit up and revise a couple of things," he said. "I did a lot of work with [former PUDDLE OF MUDD bassist] Doug Ardito [and former PUDDLE OF MUDD guitarist] Christian Stone that used to be playing with me and stuff like that. And they had basically saved a bunch of songs that were recorded. And I'm really happy about it. It was a little funky, but I'm glad that it was put into a musical vault. So it takes a lot of weight off my shoulders."

Last November, Scantlinnmade headlines for on onstage meltdown at the EPIC Event Center in Green Bay, Wisconsin where he seemed to barely get the words out to the band's hits, complained that the lighting was blinding him and abruptly ended the show after just a few songs.