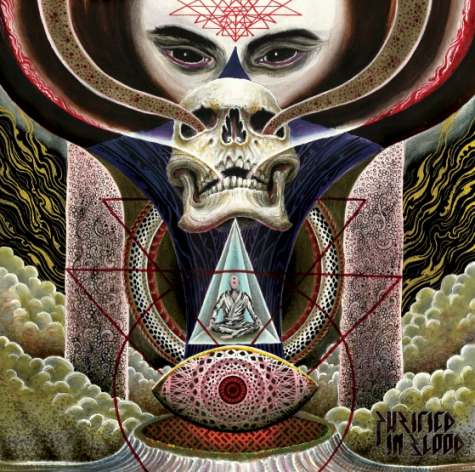 Norwegian metallers PURIFIED IN BLOOD will release their new album, "Flight Of A Dying Sun", in Europe on June 15 via Indie Recordings. The cover artwork was created by Jondix Mahashakti and can be seen below.

A single, "Mot Grav", was made available late last month and can be streamed using the SoundCloud player below.

"This is the missing link between 'Reaper Of Souls' and 'Under Black Skies'," says PURIFIED IN BLOOD singer Hallgeir S. Enoksen.

PURIFIED IN BLOOD's new album was recorded with Jacob Bredahl, who previously worked with band on 2006's "Reaper Of Souls", a CD known for its rawness and intensity.

This time around, PURIFIED IN BLOOD's second singer Glenn Reaper was not involved in the recording process and Hallgeir faced a new challenge being the band's sole vocalist — a challenge he stepped up to for the past one and a half year with no problems whatsoever. His voice range has developed a lot the past year singing alone and he takes on the task "with no remorse, no repent."

"Flight Of A Dying Sun" features guest appearances by Glenn Reaper on the power anthem "Iron Hands"; Erlend Hjelvik (KVELERTAK) on "Mot Grav"; Kjetil Møster (DATAROCK, ULTRALYD, MØSTER) on saxophone, Ådne Sæverud on organ and Jens Borge (SKADNE KREK) on double bass. Last but certainly not least they have Siberian throat singer Albert Kuvezin on board to start the whole album with his voice of war.