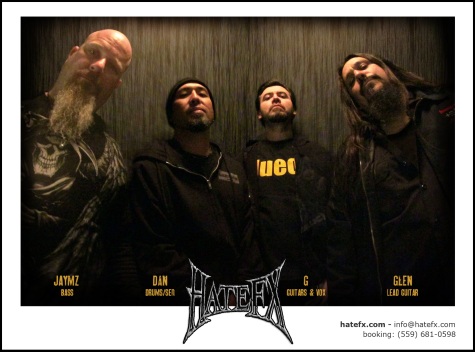 Guitarist Glen Alvelais (FORBIDDEN, TESTAMENT, LD/50) made his live debut with HATEFX on April 21 at Fulton 55 in Fresno, California as part of the third anniversary of the popular "Dirty Dowdy" podcast with fellow local acts GROOVEYARD, SPACEHOOKER, FROM THE FALLEN and SIX DAY TRUCE.

Video footage of HATEFX performing the song "Stainless Kill" (off the band's last CD, 2009's "The Holy Frail") at the Fresno show can be seen below.

Commented Glen: "t was really cool to take a break and play a show in HATEFX's hometown Fresno while deep in the middle of recording the next CD.

"Most of the guitar tracks are done and we'll be announcing a release date soon.

"I'm really enjoying the new songs a lot and it was really good to play one live to see the crowd response."

According to a press release, HATEFX's forthcoming third CD will contain "a diverse range of material" and will feature "some interesting musical guests that will be announced at a later time."

Regarding the new music, HATEFX's Chilean frontman G, who was previously a member of DOGMA, stated, "We have been hard at work since the incorporation of Glen to the fold and are very excited with what we are coming up with. It feels like we have such a musical connection that the new material is flowing organically and we will be taking our fair share of risks and branching out to add even more textures to the music. We are using a unique new method to record that has proven to be very effective and the sound should speak for itself, can't wait for everyone to check it out."

Added Glen: "I can't say enough how pumped up I am to do this CD. I get the opportunity to write solos over music that is not only driving but outstanding on its own. There's something about the music of HATEFX that is bringing out the melodic but technical solos out of me. So far the solos that I've written are coming out epic and becoming more and more of a challenge to beat the last one written. I can't wait for people to hear this new material."

Alvelais brings years of experience to the up-and-coming metal heavy hitters, who encompass a distinctive approach to metal, adding sonic textures to their mix and a light/FX-filled live show. They have become one of the strongest Central Valley outfits, having previously shared the stage with such national acts as EXODUS, FIVE FINGER DEATH PUNCH and STATIC-X, among others.