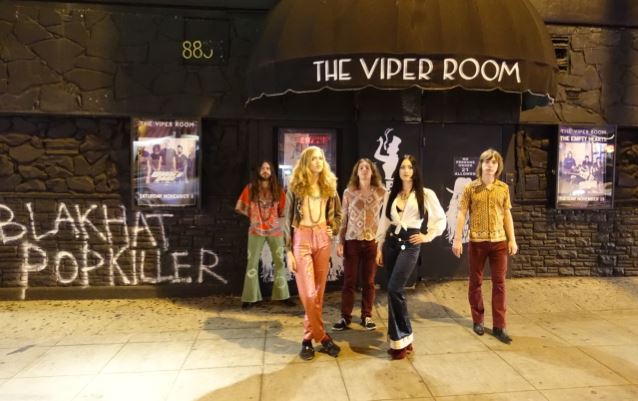 The quintet, whose music touches a variety of realms, including folk, prog, psychedelic, gothic and classic rock, blending otherworldly romance with shadowy foreboding, is currently in the studio putting the finishing touches on "Desire's Magic Theatre", which will be made available via Spinefarm/Machine Elf.

Says singer/guitarist/songwriter Rosalie Cunningham: "As I sit here in the control room at Gizzard Studios, the pride of East London, I'm excitedly realizing that our second album has turned out to be everything I'd imagined and more! My world has been so consumed by it that I've barely been able to reflect on what it has become: a Technicolor variety show, a playful display of the musical whims only briefly hinted at in our previous work; a psychedelic rock opera dedicated to our good friends Sarge Pepper and Zig Stardust."

She continues: "The twists in the tale have been carved out by the path we've taken over the last 12 months. It's been constantly shape-shifting and developing with all the wonderful experiences we've had. On behalf of the band, I give thanks to everyone who has bought a PURSON record and been to our shows. Your continued support means everything... and you have our promise that the best is yet to come..."

Says Spinefarm general manager in the U.K., Dante Bonutto: "I've been following PURSON since the early days of their career, and I've always considered the band something special; I like their vision, their theatricality, and their refusal to be corralled by a single musical genre. PURSON really do have an expansive approach to their craft, and as a songwriter, Rosalie is a unique talent on the rise. In all ways, their future is bright, and I'm delighted that Spinefarm and PURSON have now forged this fresh alliance..."

PURSON is also thrilled to confirm an appearance at this year's Download festival, playing live on the hallowed ground of Donington Park for the first time.

The band — Cunningham, George Hudson (guitars),Justin Smith (bass),and Sam Shove (keyboards) — will once again meet up with KISS at Download, having opened for them on last year's Kiss Kruise.

PURSON also rounded off 2014 with a nomination in the "Limelight" category for new and emerging talent at the Classic Prog Awards. They also released the four-track "In the Meantime" EP, mastered by John Davis from Metropolis (LED ZEPPELIN, U2, LANA DEL REY),in November.

The EP, along with their acclaimed debut album, 2013's "The Circle And The Blue Door", saw their color-saturated tapestries of BLACK SABBATH and THE BEATLES-tinged tales, evoking the sinister folkish English horror of the early '70s.