Maynard James Keenan, long known as the eccentric and unpredictable singer of two of modern rock’s most successful bands, TOOL and A PERFECT CIRCLE, will bring the live incarnation of PUSCIFER to Los Angeles on April 4 at Club Nokia.

Tickets for PUSCIFER at Club Nokia are $49, plus any additional service fees. A limited number of Gold Circle tickets ($125) will be available with a private wine tasting featuring selections from Keenan's vineyard in Club Nokia’s VIP Room. A handful of tickets will be sold for $295 and will include a signed bottle of wine from Keenan's vineyard as well as a pre-show meet-and-greet with PUSCIFER. Tickets go on-sale Friday, February 27 at 10:00 a.m. pacific. Tickets are available online at Ticketmaster.com, Ticketmaster outlets and at the Club Nokia box office.

PUSCIFER's show in Los Angeles will be just the fourth gig from the music and performance art collective, following a successful three-night run in Las Vegas two weekends ago. The act played on February 13, 14 and 15 at the Palms Casino, with the third night added after the first two quickly sold out.

The group itself posted a critique of the weekend online, writing, "Thank you for all the support at the first shows. We had a blast. Lots and lots and lots of holes and flaws and hiccups. And lots of room for improvement overall, but we feel it went well considering it was our first-ever attempt. This is a work in progress, so expect to see some minor and or major adjustments as time goes forward."

The debut PUSCIFER album, "V Is For Viagra", came out in the fall of 2007. Keenan told The Pulse of Radio that more new music is in the works, although not necessarily on a CD. "We're definitely doing new music," he said. "We have several tracks under our belts that we've been messing around with. But one of the things we'd like to do is, rather than release a collection of those songs, you know, in one format, we'd rather get together and work with different people and remix and do different things so that we release several tracks simultaneously so there is no original — they're all interpretations of a core idea."

PUSCIFER is a loose collection of musicians, comedians and other artists, some of whom worked on film and TV projects like "Mr. Show" and TENACIOUS D.

Keenan recently opened a PUSCIFER-themed store in Jerome, Arizona, where he currently lives.

TOOL has been on vacation since early 2008, although guitarist Adam Jones recently told Guitar World that he and bassist Justin Chancellor have begun writing some material for their next record. 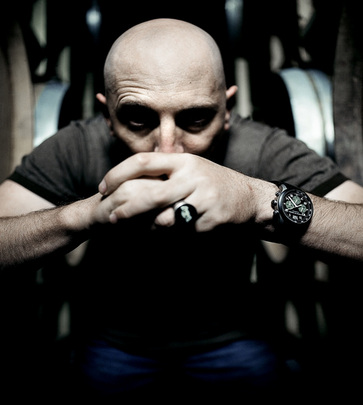