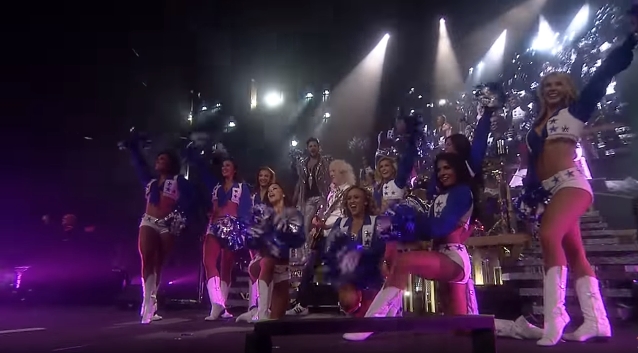 The Dallas Cowboys cheerleaders joined QUEEN + ADAM LAMBERT on stage on July 23 at the American Airlines Center in Dallas, Texas for a performance of QUEEN's classic song "Fat Bottomed Girls". Professionally filmed video footage can be seen below.

Mojo asked QUEEN guitarist Brian May how singer and gay icon Freddie Mercury could deliver such a convincing heterosexual performance on the original version of the track. He replied: "On the face of it, it's a heterosexual song because it's called 'Fat Bottomed Girls', but I was totally aware of Freddie's proclivities and the fact he was going to sing it. Plus, some of the inspiration for the song came from stuff that I saw in Freddie's life as well as my own. So it's actually not so much of a heterosexual song as you might think. [Laughs] It's a sort of pansexual song. There are so many ways you can take it."

QUEEN and Adam Lambert kicked off their "Rhapsody" tour in Vancouver earlier this month.

The tour follows an acclaimed run of 10 sold-out shows at the MGM Park Theater, Las Vegas in September 2018. Stop-offs include some of the most history-packed venues in the U.S. and Canada, including The Forum in Los Angeles (the last venue the original lineup played in North America on September 15, 1982) and New York City's Madison Square Garden (the site of past QUEEN glories, including a memorable performance from QUEEN + ADAM LAMBERT on July 17, 2014). It will wrap August 23 at Spectrum Center in Charlotte, North Carolina.

Since Lambert first shared the stage with QUEEN for the 2009 "American Idol" final, his dynamic performances have reinvigorated the band and delighted fans worldwide. They performed again together at the 2011 MTV Europe Awards and began touring together the next year as QUEEN + ADAM LAMBERT.