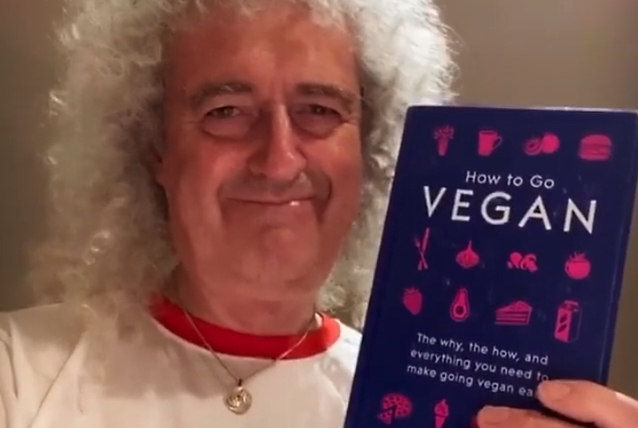 QUEEN guitarist Brian May is taking part in this year's Veganuary, a campaign that aims to encourage people to go vegan at the beginning of the year.

May is one of hundreds of thousands of people who are giving up meat to become vegan for January.

In a recent Instagram post, the musician explained his reasons for the resolution, saying that he wants "to lessen the suffering of animals," "to lessen the load on our groaning planet" and to upgrade his health. He added: "As an animal campaigner, it has been bothering me for a while that I still eat animal-derived food that has caused indignity and pain to a non-human animal. So I will try to move along the line. I won't be pressuring anyone else to do the same, and it won't change my commitment to helping farmers solve the problem of bovine TB. But ... for me ... it's time."

On January 1, May said that the first day of his vegan diet "went okay" and revealed that his local Chinese takeout restaurant is "kind enough to make sure they help" in his "new identity as a vegan."

"This is definitely a new journey," the guitarist wrote. "But I already felt a benefit in my head. I watched a program on wildlife in the ocean, and noticed that my usual feelings of guilt, because of eating seafood in spite of wanting to protect these beautiful creatures, was absent. It's perhaps the beginnings of the feeling of congruity that I'm searching for in my life. Well, it took me 72 years to get to this point. … So I ain't gonna do any preachin'!"

The Veganuary organizers ask participants to sign an online pledge promising that for the month of January, they will stick to a vegan diet — that is, no meat or animal products.

In 2019, almost half a million people signed up, and this year, the organizers are aiming for 350,000, according to The Washington Post.

Veganuary launched in the United Kingdom in 2014 and has now expanded to the United States where food companies, restaurants, other businesses, and celebrities are currently promoting the campaign throughout January.

Look what Santa brought for me ! OK ! This is my announcement of intent. Starting on the first of January I, this coming year I will be doing VEGANUARY. Which means I will eat only vegan food for that month. After that, I will take a view on whether to continue or not. I’ve already got the support of some friends who are going to join me and compare notes as we go along. European Space Agency Rosetta mission top man Matt Taylor has committed - along with Alex Milas, founder of Space Rocks. @mattc67p @alexandermilas @spacerocksoffical I’m also being joined by a close family member, and my wonderful touring PA Sharon Schwartz. If any of you folks out there are hovering on the edge out there and want to join me too, I’d be delighted. We can mutually support each other ! I figured this book is a good place to start. My reasons ? 1) to lessen the suffering of animals. 2) To lessen the load on our groaning planet. 3) for my health. And ... as an animal campaigner, it has been bothering me for a while that I still eat animal-derived food, that has caused indignity and pain to a non-human animal. So I will try to move along the line. I won’t be pressuring anyone else to do the same, and it won’t change my commitment to helping farmers solve the problem of bovine TB. But ... for me ... it’s time. 💥💥💥💥 How about a hashtag ? #Veganuary2020 and #VeganuaryBri Cheers folks - Bri 💥💥💥💥💥 Wow ! I got lots of support !! Thanks PALS !!

Thank you @yuki_rogers.stark - this warmed my heart. My Cyborg friend (💥💥💥💥 OK - Briborg !!!) will be accompanying me to Korea and Japan soon - and thence to New Zealand and Australia. He’s in training. Meanwhile I am reaching for a new identity as a Vegan, for a while at least. My first day of Veganuary went OK. I will be looking at your comments to see how yours went, those if you good folks who are joining me. If you’re not, don’t worry. We all have our paths to tread. I wasn’t ready to do this last year, but was so impressed by the success of almost all my SAVE-ME team that I determined to try it out this year. What did I eat today ? Well, breakfast was okay, though already imperfect! We have to allow ourselves a few little imperfections at first, I am told. Waking up in a hotel, I ordered mushrooms on toast and a baked tomato along with some baked beans. Very good indeed. No problem there, except that they sent me 2 lots of spread and I had no idea which one was the dairy free option! Then I had a plane journey, on which I was lucky enough to be plied with lots of fruit and veg and some delicious tomato soup. Arriving home weary and worn, I indulged in my favourite Chinese takeaway, who have already been kind enough to make sure they help me in my Veganuary efforts. Beansprouts with spring onions and cashews, steamed rice, and some sweet-and-sour delicious vegetables, not forgetting some seaweed. Happy. Easy, huh ? Well, I’ll be honest - I DID feel a craving for sweet and sour prawns, my ancient weakness, and I missed the egg in the rice. This is definitely a new journey. But I already felt a benefit in my head. I watched a programme on wildlife in the ocean, and noticed that my usual feelings of guilt, because of eating seafood in spite of wanting to protect these beautiful creatures, was absent. It’s perhaps the beginnings of the feeling of congruity that I’m searching for in my life. Well, it took me 72 years to get to this point !! So I ain’t gonna do any preachin’ !! Cheers Folks ! Bri