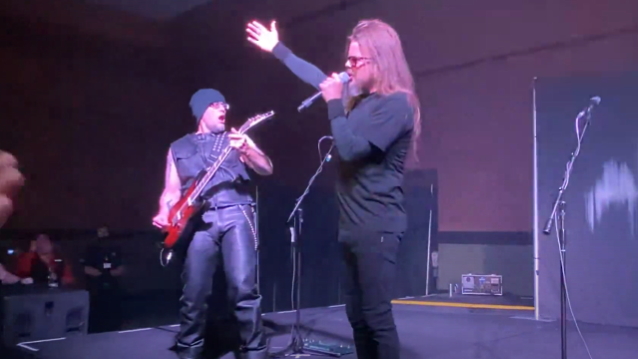 QUEENSRŸCHE guitarist Parker Lundgren was absent from the band's concert this past Friday (May 21) at the Chiefs Event Center at Shoshone-Bannock Casino in Fort Hall, Idaho. Filling in for him was Mike Stone, who joined QUEENSRŸCHE for the 2003 album "Tribe" and stayed with the band for six years. Mike was eventually replaced by Lundgren, a former member of original QUEENSRŸCHE singer Geoff Tate's solo group who was also briefly married to Geoff's stepdaughter Miranda.

In 2017, Lundgren, who joined QUEENSRŸCHE in 2009, opened his own guitar shop called Diablo Guitars in the Seattle area.

Lundgren previously sat out some of QUEENSRŸCHE's U.S. shows in September 2018 when the band was on tour as the support act for SCORPIONS.

Wilton and bassist Eddie Jackson are the sole remaining original members of QUEENSRŸCHE, which split with Tate in 2012 and replaced him with ex-CRIMSON GLORY frontman Todd La Torre.