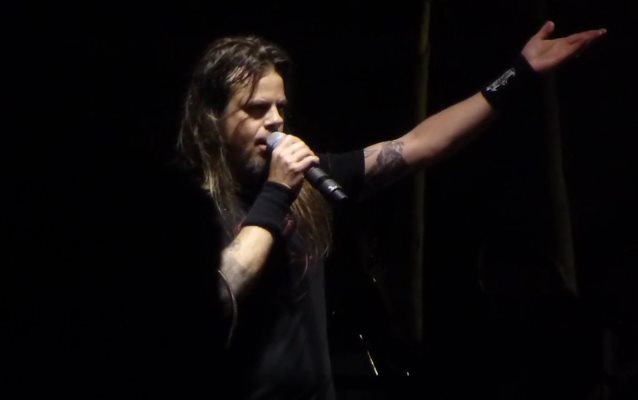 QUEENSRŸCHE Singer Confronts 'Hater' At Tampa Concert: 'I Don't Tell You To F**k Off At Your House'

QUEENSRŸCHE frontman Todd La Torre confronted a man who was flipping him off during the band's show in Florida by returning the gesture and scolding the concertgoer.

While in the middle of performing "Screaming In Digital" with his bandmates on December 1 at The Cuban Club in Tampa, Todd noticed the unruly fan in the crowd and became visibly irate. He then acknowledged the culprit with a raised middle finger salute of his own without missing a note.

The incident is shown at the 2:20 and 3:45 marks in first YouTube clip below.

During the same show, La Torre stressed the importance of lifting people up and urged the crowd to not "be a fucking hater" while dedicating the song "Take Hold Of The Flame" to his friend, drummer Shawn Lowery, who is battling Stage 4 thyroid cancer.

La Torre last year pleaded with QUEENSRŸCHE's fans to "exercise a little more altruism and compassion" when it comes to criticizing the current version of the group and QUEENSRŸCHE's former frontman Geoff Tate, explaining that "we're all just people at the end of the day."

La Torre, who joined QUEENSRŸCHE in June 2012 as the replacement for Tate, has recorded two albums with the band: 2013's "Queensrÿche" and 2015's "Condition Hüman". His addition to the group has sharply divided QUEENSRŸCHE fans, with some longtime followers of the Seattle band feeling that QUEENSRŸCHE cannot exist without its iconic original lead singer.

During an appearance on the SiriusXM satellite radio show "Eddie Trunk Live", La Torre said: "Some of these fans, they almost take it more seriously than anybody in the band. They're so passionate about it, and it's such a personal thing. And we love 'em for it, but it can be an asset and a detriment… I mean, there's a difference between constructive criticism and unwavering, relentless bashing. I'm a human being, he's a human being… We're all just people at the end of the day, and we do have feelings. And I wish people would just exercise a little more altruism and compassion. Because people just say things with no filter and no regard, without thinking of the recipient on the other side. And at the end of the day, we just wanna write great music for people, and so does he. And, look, if the QUEENSRŸCHE fan base feels they have double the pleasure of music to listen to, then stop bitching and enjoy everybody's music."

QUEENSRŸCHE is in the middle of a month-long headlining tour of the United States. Support on the trek is coming from ARMORED SAINT and MIDNIGHT ETERNAL.