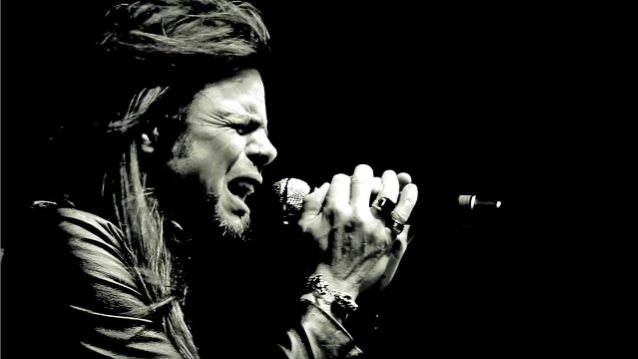 After La Torre posted the picture on his Facebook page this past New Year's Eve, he was slammed by apparent Trump voters who accused him of "alienating half of [QUEENSRŸCHE's] already hugely diminished fan base" by voicing his political views. The singer then got into a heated discussion about politics in which he tried to use facts to make his points, only to be repeatedly shut down for being "disrespectful." One of those critics was former VIRGIN STEELE guitarist Jack Starr, who wrote in the comments section below Todd's post: "The picture shows a great lack of respect to our president-elect and really is not funny… Humor has its place but behind this particular cartoon was a not very veiled attack on Trump and there are many among us in the community we call heavy metal who are very happy that Trump will be representing our country very shortly and I happen to be one of them."

La Torre, who has made no secret of his disdain for Trump, responded to his critics several times below his original post, writing in part: "As for the comment that I have 'offended' a huge base, let the record show that as I type this, the data is that there are [357] comments to [658] shares. Apparently [658] people thought this was funny, nothing more and nothing less. Lighten up people, it's about to be 2017, CHEERS EVERYONE!!!! Life could use a little humor."

He added: "It's a meme, a funny meme. How one chooses to feel about that is on them. I'm not up arms in the least when I see something online or a view I disagree with. I'm all for great humor and healthy discussion however; )

"How about this perspective as a closing statement I would like share: You mentioned lines being drawn, i.e. if [you] shared that meme at work, [you] would be fired. The president-elect of the United States of America, as a public figure, goes on Twitter, disrespects those lines, offends religions and ethnicities, and had he done these things in the workplace that offend such people and crossed those lines that you have mentioned, he would have been fired due to racism and discrimination.

"I care about my country. That doesn't mean I have to respect disrespectful rhetoric or people, even the president.

"Hillary could have won, [you] could hate her, not support her even in office, and that doesn't mean you love your country less.

"I'm sure we all have more in common than not, and healthy discussion is always great!

"I'm a regular guy, which is why I don't ever feel like I'm some star or someone that can't just be a human with an opinion like anyone else.

"Being in a band doesn't and should not negate anyone from being part of a discussion.

"So to put it in perspective, the world around us shapes our perception, art is subjective, and I'm not a circus monkey to sing and dance because someone likes it or pays me to do that. I am a human being, just like you. I'm no better nor worse.

"I could easily write a song about how perception and opinions are, maybe you would love it, and perhaps I wrote it because of this dialogue and interaction. So, perhaps you shouldn't be so quick to judge what I do, who I am, etc.

"As for QUEENSRŸCHE, I speak for Todd, not the band's opinions or anything else."

Last summer, QUEENSRŸCHE guitarist Michael Wilton revealed that Donald Trump was his forced choice in the U.S. presidential election. Asked by SMNNews whom he would have picked between Trump and Democratic presidential nominee Hillary Clinton if the presidential election were held last July, Wilton said: "You know, I'm kind of disappointed in both of 'em, but if I had to choose the leader of the world, I think I'd probably want Trump."

QUEENSRŸCHE recently completed a month-long headlining tour of the United States. Support on the trek came from ARMORED SAINT and MIDNIGHT ETERNAL.

The band plans to enter the studio later this month to write and record the follow-up to "Condition Hüman" for a late 2017 release.