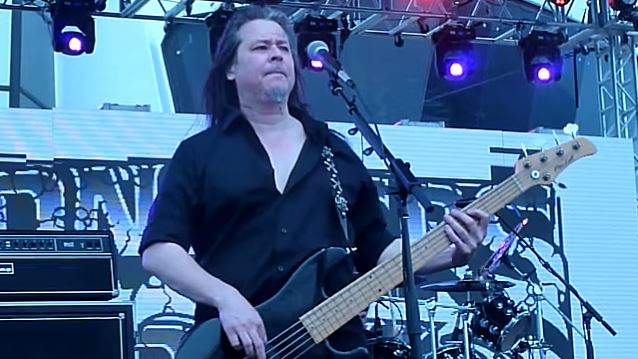 QUEENSRŸCHE's EDDIE JACKSON: Being Restricted To Only Performing Certain Songs Was Difficult

QUEENSRŸCHE bassist Eddie Jackson was interviewed on a recent edition of the "Noize In The Attic" podcast. You can listen to the chat below.

Asked about the band's songwriting approach for the follow-up to 2013's "Queensrÿche" album, Eddie said: "We're constantly writing. And even during the recording of this album, I was still writing songs. Even though they might be for the album, but it's just part of the… You just continue writing, you know… But this was a group collaboration. I mean, everybody contributed, just like the last album."

He continued: "We're just writing what we feel. And that's how we've always taken it — that sort of approach. You write for yourself, but we only hope that it translates over to the fans. But so far, we've been fortunate enough to achieve that."

Eddie added: "I think the fans are gonna really like this one, just simply because it kind of brings back a little bit of the earlier QUEENSRŸCHE style, with a more current sound as well. Now we're able to write and not worry about anything more than just focusing on what we're doing."

He continued: "For a while, being restricted to what songs you wanna perform, it was difficult. But now, it's, like… To work with a singer [Todd La Torre] where his favorite albums are from 'Empire', 'Promised Land' and back, that's a nice thing to have. One of his favorite albums is 'The Warning', and for him to say that and realize that, 'God, this is the songs that a lot of fans have been wanting to hear from years.' Now that we're able to do that, it just opens up so many more possibilities."

"Queensrÿche" sold around 13,500 copies in the United States in its first week of release to land at position No. 23 on The Billboard 200 chart. The record arrived in stores on June 25, 2013 via Century Media Records.