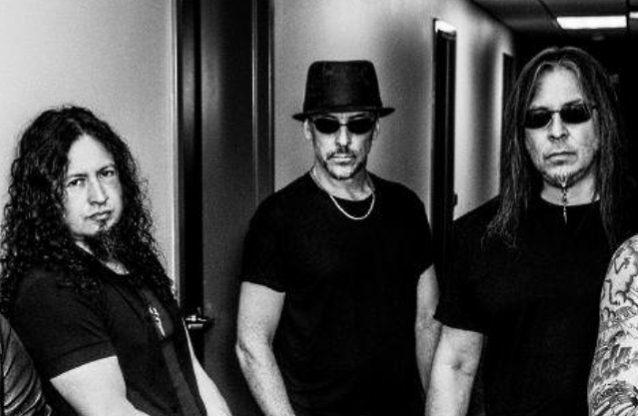 In a new interview with Classic Rock magazine, QUEENSRŸCHE guitarist Michael Wilton was asked for the latest in the legal dispute with co-founding drummer Scott Rockenfeld, who sued QUEENSRŸCHE and was counter-sued over a number of allegations. Michael said: "It's ongoing and the lawyers are dealing with it. It'll work itself out. QUEENSRŸCHE are always being sued about something, that's part of the business. But life goes on."

During the same chat, Wilton was full of praise for Casey Grillo, who was QUEENSRŸCHE's touring drummer for five years before joining the band as a full member.

"Besides being a great drummer with his own personality and style, Casey became a part of the writing and arrangement," Michael said. "He's a real team player."

In October 2021, Rockenfield filed a lawsuit against Wilton and QUEENSRŸCHE bassist Eddie Jackson, alleging, among other things, breach of contract, breach of fiduciary duty and wrongful discharge. In the lawsuit, which was filed in Snohomish County Superior Court, Rockenfield claimed that he took paternal leave of absence from QUEENSRŸCHE in February 2017 after his fiancée experienced complications during the birth of their son and had to have an emergency Cesarean delivery. According to the drummer, his leave of absence was approved by the members of QUEENSRŸCHE and he was to retain an equal one-third interest in all QUEENSRŸCHE companies (QR Companies),including Tri-Ryche Corporation, Melodisc LTD., Queensryche Merchandising, Inc., EMS Music, LLC and Queensryche Holdings, LLC.

Rockfenfield also claimed that Wilton and Jackson did not include him in the recording of QUEENSRŸCHE's latest album, "The Verdict", "despite his availability and willingness to participate."

On March 10, 2022, Wilton and Jackson filed their "answers, affirmative defenses and counterclaims" in which they denied Rockenfield was wrongfully dismissed from QUEENSRŸCHE. In the document, which was obtained by BLABBERMOUTH.NET, they claim that Rockenfield announced in March 2017 that he was taking a few months off from touring fully aware that "QUEENSRŸCHE was in the middle of a tour and was contractually obligated to play a number of live concerts, including an upcoming April 1, 2017 concert in California, to be followed by several concerts in the U.S. scheduled for April and May, and that QUEENSRŸCHE, including Rockenfield, had agreed and were scheduled in June 2017 to play 13 live shows at different venues across Europe. Rockenfield's sudden departure required Jackson and Wilton to locate and hire a drummer" — former KAMELOT drummer Casey Grillo — "so that the band could comply with their contractual touring obligations."

Wilton and Jackson go on to say that Rockenfield "made no effort to assist the band in finding a substitute drummer for the remaining concert dates on the QUEENSRŸCHE tour." They also claim that they, along with singer Todd La Torre and the band's manager began attempting to contact Rockenfield "near the end of 2017" to discuss his participation on the next QUEENSRŸCHE album. However, "Rockenfield only sporadically responded to band members and band management about participating in the recording the new album. On those occasions when Rockenfield did respond to members of QUEENSRŸCHE or band management, he obfuscated and refused to commit or agree to rejoin the band or to participate in the process of recording the new album."

Wilton and Jackson also accuse Rockenfield of failing to generate any income to pay off a loan used to cover the settlement QUEENSRŸCHE had reached with the band's original singer Geoff Tate eight years ago.

"When QUEENSRŸCHE had negotiated their financial settlement with Tate in 2014, QUEENSRŸCHE's then attorney recommended and arranged for Jackson, Wilton and Rockenfield to secure a loan from a particular third party lender, the proceeds of which would to be used to pay Tate a lump sum of the entire amount of the agreed upon settlement," the document states. "Wilton, Jackson and Rockenfield signed the loan agreement as individuals doing business as QUEENSRŸCHE. Under the Agreement, Jackson, Wilton and Rockenfield were jointly and severally liable to the Lender for repayment of the loan. The Lender required the band members to pledge real property as security for the loan. Wilton and Jackson pledged real property that each individually owned. As additional security Wilton and Jackson were required to pledge specific valuable and irreplaceable personal property they had accumulated during their three decades of playing and performing in rock and roll music all over the world. Rockenfield did not own any real property. Rockenfield was only required to pledge some computer equipment he had used for recording his side project, Hollywood Loops. With the rapid advancement of computer technology, any value of the computer equipment Rockenfield pledged, quickly diminished."

Wilton and Jackson note in the document that "the revenue generated through QUEENSRŸCHE concerts was the primary income source that allowed QUEENSRŸCHE band members to stay current on Tate loan. Since Rockenfield left the band in Spring 2017, Rockenfield has not generated any income for use to pay off the loan used to pay Tate. Since Rockenfield left the band in 2017, he has not contributed any money to pay off the Tate loan. Rockenfield's failure to generate any income for the band after leaving in 2017, resulted in the other obligors, Jackson and Wilton, shouldering the entire responsibility to pay off the Tate loan, including Rockenfield's portion, and, Rockenfield's actions put Jackson and Wilton at risk of default and loss of their own property."

According to the document, Rockenfield opted not to participate in any of at least 65 concerts QUEENSRŸCHE played between March of 2017 and October 2018, and was informed and invited to attend pre-production meetings for "The Verdict" album in 2018. "Although the band's pre-production work was occurring approximately 10-12 miles from Rockenfield's residence, he declined to take part," the document states.

Wilton and Jackson go on to say that "Rockenfield's initial indication that he would participate, at least telephonically, in the October 12, 2018 meeting, only to fail to make any effort to do so, along with his to failure to notify either Jackson or Wilton that he was not going to participate, was consistent with the behavior Rockenfield had shown the band and in matters of QUEENSRŸCHE business for most of the previous year and a half."

Wilton and Jackson also take issue with Rockenfield's decision to launch a cryptic new QUEENSRŸCHE-centric web site in May 2021 without notice or permission from them. On the Queensryche2021.com web site, Rockenfield "'teased' viewers that he would be releasing new QUEENSRŸCHE music," according to the document. "Rockenfield followed his on-line posting with statements on social media that he was 'ready to rock,' inviting fans to join his site by providing him with their names and email contacts." They also claim that "without permission or approval from QUEENSRŸCHE or its label, Rockenfield posted an out-take of a version of an old song QUEENSRŸCHE had decided not to use in a prior album." They add that "Rockenfield actually had no new QUEENSRŸCHE music to release and his on-line posts served only to confuse fans and damage the QUEENSRŸCHE brand."

Wilton and Jackson asked the court to dismiss Rockenfield's claims with prejudice, declare Rockenfield abandoned his position of employment with QUEENSRŸCHE and to award the two of them "general, special, and statutory damages and equitable remedies" that they are entitled to.