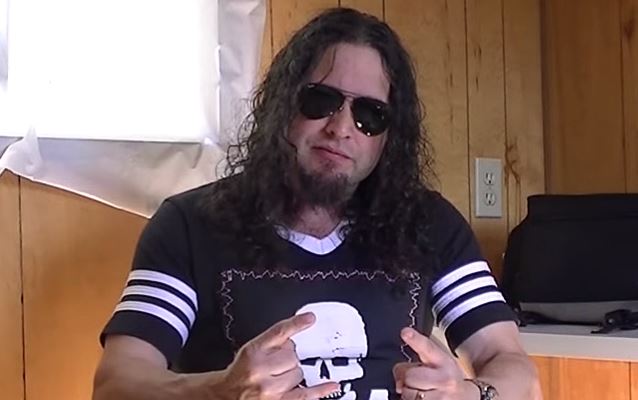 QUEENSRŸCHE's MICHAEL WILTON: 'It's A Blessing To Be Five Minds That Think Alike At This Time'

QUEENSRŸCHE and SOULBENDER guitarist Michael Wilton was interviewed on the latest episode of "One On One with Mitch Lafon". You can now listen to the chat using the Spreaker widget below. (Note: Ace Frehley is interviewed early in the podcast. The Wilton interview begins around the 29-minute mark.) A couple of excerpts from the chat follow (transcribed by BLABBERMOUTH.NET).

On the progress of the songwriting sessions for the follow-up to last year's "Queensrÿche" CD:

"Well, QUEENSRŸCHE right now is writing another CD, another album. We've had some time in between this sporadic touring that we're doing right now. The 'Return To History' tour has been going on for almost two years, and it's great that we have [gig] offers and people that wanna see us. But now it's time to really get the creative juices flowing and get the songs written. Which we're doing really good right now; we've got about 15 tunes that we're concentrating on and probably about five more that we're gonna try to get in there. The situation with this album is that there's no underlying tension; it's, like, we've done it before, we've all worked together before, the chemistry is great, and we just wanna take it to the next level. The plan is to have an album out sometime in 2015, hopefully early spring, and do a whole world tour, again, in 2015."

On the musical direction of the new QUEENSRŸCHE material:

"[The songs] all in different stages of development right now, but you've got three of the main guys that make up QUEENSRŸCHE, so you've got the DNA there in the music, and it's gonna sound like QUEENSRŸCHE regardless. But I think it's more about a period of time that had an energy, that had a different kind of energy than the [latter-day stuff], and it's capturing that. We were known as a touring band, a touring guitar band, and I think everybody loves that idea, and especially these days when you have to tour to make a living in this industry. So when your mindset is kind of in your roots and where you've been, you treat it with respect, and you don't do a carbon copy or anything. The influence is there, and it's great to revisit the feeling that you had during that time, and the special moments and everything, and try to channel that into wht you're writing at this time."

"I can't really pin it down, but I think it's always gonna be a harder edge, a hard-rock feeling, elements of metal, I guess, but we always tend to have some kind of a little bit of progressiveness in there, but always have a melodic content that's involved."

"We all grow as musicians, and with this lineup, it's really just a blessing to be five minds that really think alike at this present time. The outlook is just great. The days are better each day, and t's just fun to go out and play these shows. And it's one show at a time. And it's convincing people all over the world."