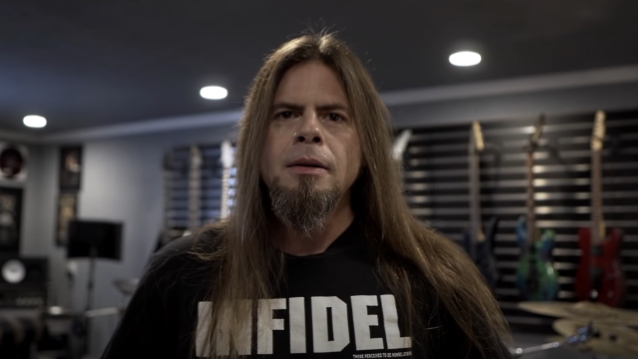 QUEENSRŸCHE's TODD LA TORRE Blasts 'Yellow Press' But Says He Will 'Take' The Publicity: 'It Keeps My Name Out There'

In a new chat with George Dionne of KNAC.COM, QUEENSRŸCHE vocalist Todd La Torre was asked how he feels about being "a favorite" of "some web sites" which highlight his quotes from "certain interviews" and "make the most sensational headline out of it." He responded (as transcribed by BLABBERMOUTH.NET): "I know bands that are, like, 'You know, man, I wanna get this on this site' — we're not gonna name the name, but we know who we're talking about — 'I wanna get it on this site.' And people pay money. And there's people that can't get on that site or some sites out there. And I'll say that the governor of Texas is an asshole or something, and the next thing you know, it's this big headline.

"And look, when I tweet certain things, I am fully aware that there's a possibility or even a likelihood that it's gonna make a headline," he admitted. "What bothers me about 'yellow press' is the out-of-context… I can do an hour interview and talk about all the things you and I are talking about, and then you can ask me one question and I'll say an answer and the headline is that. And it's like, dude, really? Out of all of the pertinent, really good stuff — what I would consider good stuff or important stuff — totally got thrown under the rug and this is all you chose to pick out of this really good interview? And that sucks. But you know what? I guess when nobody gives a shit what I'm saying, that's when I have bigger problems. So I'll take it, but I do wish that there was a little more integrity to focus on what the interview is really about, or what it is that I'm really saying and the context in which I'm saying it. I mean, context is key. But you know what? The people that read and comment on those sites, those aren't people that are really supporting these bands that they're criticizing or saying whatever.

"So, honestly, I don't give two shits about the haters or anything, but it's the sensationalism where it's, like, can you have a little more integrity than to do that to a band that maybe you respect what the band has done," La Torre added. "It's not [just] me; there's a handful of guys that say something and it's always in the press. But for the viewership, it keeps my name out there, and I really can't complain. [Laughs] And you know what? I say what I feel; I say what I wanna say. And I'm not gonna be muzzled. I try to speak in an articulate way, but there's other times where I just say it like it is and rub some people the wrong way. But such is life."

Todd, who lives in St. Petersburg, Florida, has made no secret of his disdain for former U.S. president Donald Trump and has often used his social media to deride Republican positions on various issues.

A year and a half ago, La Torre blasted America's deep political divides, distrust of centralized authority and even skepticism of science as it relates to the coronavirus pandemic, saying in an interview: "Science is important. Skepticism is important. But in America, people, they don't believe what's happened over the last several years. People have gone from skepticism to just complete disbelief of anything and everything they hear or see. So you can have an epidemiologist that spent their life as an expert in this field, and then you have other people that just think it's B.S. — they don't believe it. So you have this weird thing where, as a matter of public safety, [some people say] 'You are infringing on my rights. This is America,' and that kind of mentality. And you say, 'Wait a minute. Your rights stop when you are in a public place, and now public health and safety is the concern.'"

La Torre joined his first band BLACKWELL as the drummer, performing in high school talent shows and entering into the club rock music scene in Tampa Bay, Florida. In 2009, Todd was suggested to CRIMSON GLORY guitarist Jon Drenning by a mutual friend to help with some vocal rehearsals in preparation for a CRIMSON GLORY memorial concert. This would pave the way for more collaborations with the band, eventually joining as the band’s new permanent vocalist. La Torre was the lead singer for CRIMSON GLORY from late 2010 until resigned from the band in early 2013. In 2012, Todd became a household name in the metal world when he officially became the new lead vocalist of QUEENSRŸCHE. The band immediately began touring globally and started writing new material for the self-titled 2013 album "Queensrÿche". To date, QUEENSRŸCHE has released three studio albums with La Torre: "Queensrÿche", "Condition Hüman" (2015) and "The Verdict" (2019). The band recently completed work on its fourth release for Century Media Records, "Digital Noise Alliance", due on October 7.