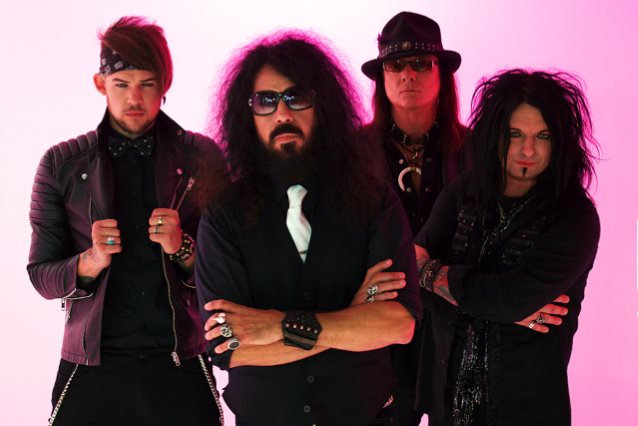 QUIET RIOT's FRANKIE BANALI: JAMES DURBIN 'Has Proved To Be The Best Singer We've Had' Since Band's 2010 Resurrection

Frankie Banali says that James Durbin "has proved to be the best singer" QUIET RIOT has had since the band was resurrected eight years ago.

In a brand new interview with The Tribune-Democrat, Banali praised QUIET RIOT's latest addition, saying: "When I decided to restart QUIET RIOT in 2010, I knew it was going to be very difficult — both professionally and personally — because Kevin [DuBrow, original QUIET RIOT singer] and I were best friends for 27 years.

Banali also offered an update on QUIET RIOT's upcoming live album and DVD, which was filmed this past April appearance at the Frontiers Rock Festival in Milan, Italy.

"I just finished approving the final audio mixes as well as the live footage and I'm really happy with the final results," he said. "I'm waiting for the label, Frontiers Music, to advise when they think will be a good release date.

"I opted not to do any fixes, overdubs or studio trickery that prevails in many so-called 'live' music CDs and videos. What you get is a very honest representation of a night with QUIET RIOT live.

"I put together a set that covers the majority of the 'Metal Health' songs, a number from our second release, 'Condition Critical', as well as representing songs from 'QR III'. We also went deep in the QR catalog with a song from 1993's 'Terrified' record and the 1995 'Down To The Bone' record. Of course, we also performed two songs from the 2017 'Road Rage' record."

In addition to Banali and Durbin, QUIET RIOT's current lineup included bassist Chuck Wright (who has been in and out of the group since 1982) and guitarist Alex Grossi.