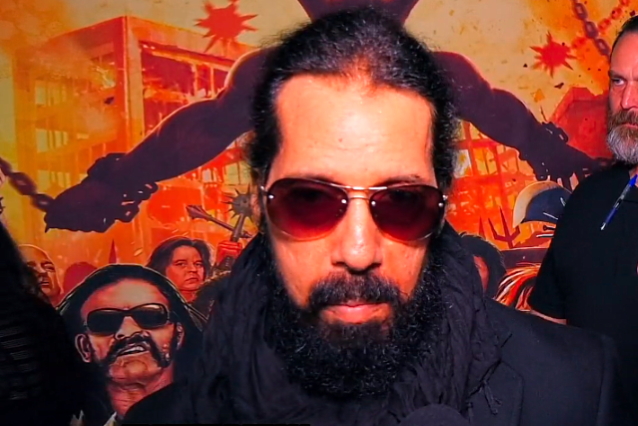 Prior to the Ronnie James Dio Stand Up And Shout Cancer Fund's 10th Memorial Awards Gala, which took place at The Avalon in Hollywood, California on February 20, QUIET RIOT drummer Frankie Banali spoke to "The Blairing Out With Eric Blair Show" about his ongoing cancer battle. He said (see video below): "I was diagnosed with Stage IV pancreatic cancer that had metastasized to the liver. And there is no Stage V. And the original prognosis [last April] is that I would have died middle to the end of October. And 10 months later, here I am. So I think it's very important for people to be proactive with their health."

He continued: "There is no test for pancreatic cancer. I did physicals for 30 years straight, and they never found it. And they found it when it was too late to really do much about it. So I continue to fight. But it's really important for people to be proactive and ask their doctors, if there's pancreatic cancer in their family history, to get a scan. That's the only way you'll find out — to get a scan. And that will reveal the truth. The blood test is not gonna do it. There is no test. So it's very important.

"If Ronnie's [James Dio] cancer had been discovered sooner, maybe he would have been here doing pictures today for a different event. God bless him."

Banali was diagnosed with pancreatic cancer after going to the emergency room for shortness of breath, leg pain and loss of energy. A scan of his lungs caught an image of his liver, which is where the first spots were seen. Then came the discovery of a tumor on his pancreas. He has been in treatment since last spring and is now completing his twelfth round of chemotherapy with the hopes of shrinking or controlling the cancer.