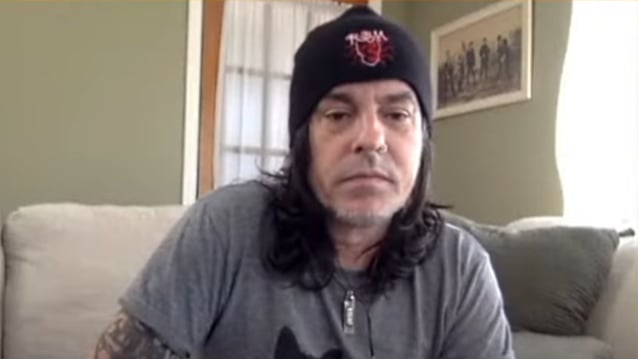 RACHEL BOLAN On Upcoming SKID ROW Album: 'I Haven't Been This Excited About Our Songs In Quite Some Time'

Bassist Rachel Bolan offered an update on the progress of the recording sessions for the LP in a new interview with Adika Live! Speaking about working with Raskulinecz, Rachel said (as transcribed by BLABBERMOUTH.NET): "It's an incredible experience. It's really cool, because he was a fan when he was young. So we're going in, we'll have riffs and we'll play him a song or whatever, and he's, like, '[It's] not SKID ROW.' [Laughs<] It's just such a weird dynamic. He's, like, 'That sounds like it could be a song for so-and-so,' and this and that and the other thing. And I'm, like, 'Man, he's right.'

"He told me right off the bat, he was, like, 'Man, I'm just gonna say stuff. I don't wanna hurt your feelings about stuff,'" Bolan continued. "He said it to all of us. He goes, 'But I'm just coming from a different perspective — one as a fan, two as a producer. And I wanna make a kick-ass SKID ROW record.' We went in with a couple of ballad ideas, and he's, like, 'Let's just rock this — let's just rock this out.' It's, like, cool. We're into it.

"His process is different than what we've done in the past, and it's just amazing, man. It's coming out so good, [and] I'm so stoked."

"We're cranking on all eight cylinders, man," Rachel said. We've got great songs we're happy with. We've got a killer producer, making a killer record. We love our label. And bands don't say that a lot, but we love their whole way of doing things. And we're just looking to get back out there. But the album's gonna be out probably first quarter of '22.

"It's kick-ass," he repeated. "I haven't been this excited about our songs in quite some time. And we're all sharing the same excitement, which is great."

In early August, SKID ROW celebrated the 30th anniversary of its classic second album, "Slave To The Grind", by performing it in its entirety at The Amphitheater at Rolling Hills Casino And Resort in Corning, California.

Last summer, Bolan told SiriusXM's "Trunk Nation With Eddie Trunk" that he and his bandmates would embark on a "Slave To The Grind" 30th-anniversary tour in 2021.