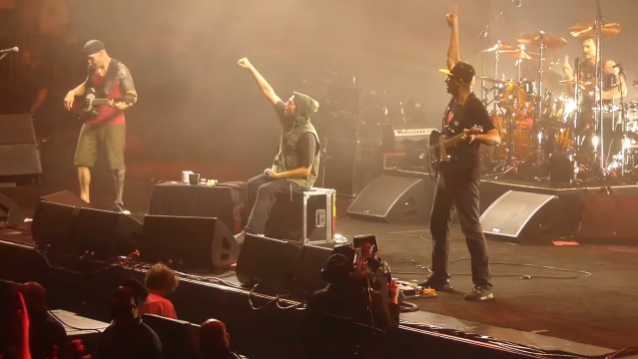 RAGE AGAINST THE MACHINE recent shows in New York City have raised $1 million for charity.

As was the case with the rest of the concerts on RAGE AGAINST THE MACHINE's North American "Public Service Announcement" tour, 10% of tickets sold for the five dates at Madison Square Garden earlier this month were made available at "charity pricing". These tickets were sold at a much higher price than general admission entries as a way of combating ticket touts while raising vital funds for local charities.

"Charity tickets purchased by our fans for our five night Madison Square Garden residency raised $1,000,000," the band wrote in a statement on Instagram. "These funds will be distributed to the Immigrant Defense Project and by WhyHunger to Neighbors Together and The Campaign Against Hunger in New York City."

Known as the most overtly political band of its generation, RAGE AGAINST THE MACHINE donated nearly half a million dollars to a number of organizations fighting to protect reproductive rights following the overturning of Roe v. Wade by the U.S. Supreme Court.

RAGE AGAINST THE MACHINE frontman Zack De La Rocha reportedly tore the anterior cruciate ligament (ACL) in his left knee during the band's July 11 concert in Chicago. The incident occurred during the fourth song of the second show on the group's long-delayed "Public Service Announcement" reunion tour. Ever since then, Zack has been performing while seated and the shows have gone off without a hitch, even though stagehands have had to carry the vocalist on and off the stage every night.

Last week, RAGE AGAINST THE MACHINE canceled the August and September 2022 European leg of the band's tour to allow De La Rocha to recover from his injury.

13 European shows were scrapped, including appearances at Britain's Reading and Leeds festivals.

RAGE AGAINST THE MACHINE kicked off "Public Service Announcement" on July 9 in front of roughly 30,000 fans at Alpine Valley Music Theatre in East Troy, Wisconsin. The band opened its first show in 11 years with "Bombtrack", a song from RAGE AGAINST THE MACHINE's classic 1992 debut album, and closed the set with "Killing In The Name". Other tracks performed during the concert included "Bulls On Parade", "Guerrilla Radio", "Sleep Now In The Fire", "Wake Up", "Testify" and a cover of Bruce Springsteen's "The Ghost Of Tom Joad".