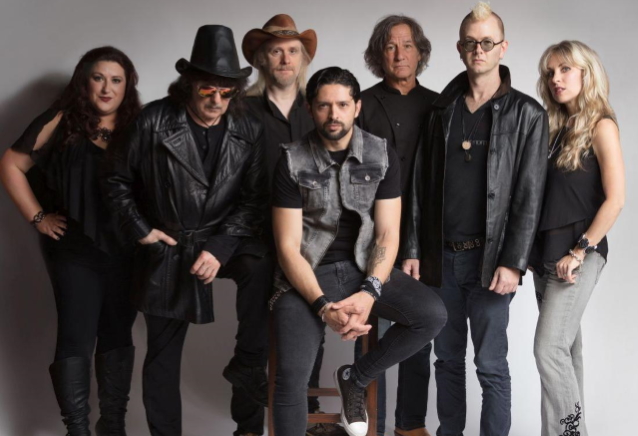 Ritchie Blackmore introduced a new RAINBOW lineup in 2016 that included singer Ronnie Romero, STRATOVARIUS keyboardist Jens Johansson, BLACKMORE'S NIGHT drummer David Keith, bassist Bob Nouveau (a.k.a. Robert "Bob" Curiano, ex-BLACKMORE'S NIGHT) and backing singers Candice Night and Lady Lynn. The lineup played sporadic shows and issued a series of singles, including "The Storm" and a newly recorded version of "Black Sheep Of The Family". The band has not played a live show since 2019, with Blackmore since returning to BLACKMORE'S NIGHT.

In a recent interview with BLABBERMOUTH.NET, Johansson was asked whether he agreed with Romero's recent comment that there are no future plans for RAINBOW. "I don't know," he said. "You never know. At the moment, of course, with the pandemic, everything went completely right down to zero, all activities. I think he's back to doing some stuff with BLACKMORE'S NIGHT. To be honest, that's where his heart is. If he has to focus on one band, that would be the number one priority. I was always joking that BLACKMORE'S NIGHT was 'the' band and RAINBOW was his basement band. [Laughs] Like a project. Whenever we would do European gigs with RAINBOW, it was somehow that the gigs would be placed around when certain castles were unavailable. [Laughs] It was like, 'Sweden Rock has 40 to 50 thousand people.' They'd say, 'No, it's on the wrong weekend. This castle is available, so fuck Sweden Rock.' That was the attitude that BLACKMORE'S NIGHT is the priority, which I think is cute.

Although Ritchie initially said that he had no plans to make new RAINBOW music — explaining in early 2016 that he wanted to "just get back to playing the old songs one more time" — he later revealed to Japan's Burrn! magazine that he had changed his mind.