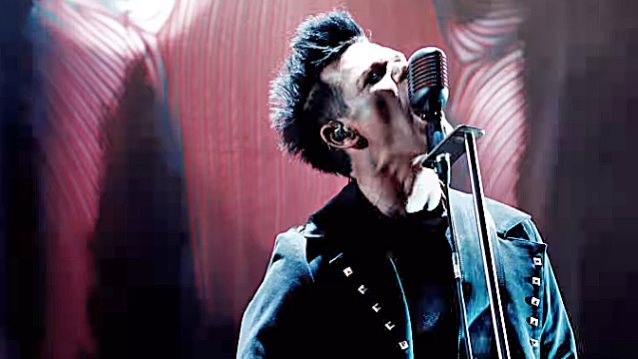 In a brand new interview with Belgium's Studio Brussel conducted at this past weekend's Graspop Metal Meeting, RAMMSTEIN guitarist Richard Z. Kruspe was asked what the band's secret is for keeping its lineup intact for more than two decades. "Talking," he responded (see video below). "Group talking. And we have, like… Once a week, we [go to] a psychiatrist and we talk about problems and how to deal with our problems, how to solve those problems. You really have to work on that; otherwise, you're not gonna make it. It's like a relationship. It's a marriage without sex, and that's a problem. Sex can solve a lot of problems. So with us, it's different — we need talking, even more than other couples."

"Paris", the new concert DVD and Blu-ray from RAMMSTEIN, was released on May 19. The set was recorded in March 2012 at the then-named Palais Omnisports de Paris-Bercy in Paris (now AccorHotels Arena) during RAMMSTEIN's "Made In Germany" tour, and was helmed by the band's longtime collaborator, Swedish director Jonas Åkerlund. Åkerlund has also worked with METALLICA, SATYRICON, MADONNA and THE PRODIGY, among others.