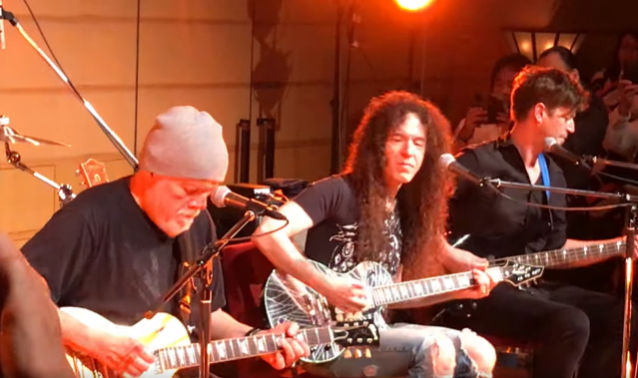 The legendary guitarist and songwriter behind such hits as "American Woman" and "You Ain't Seen Nothing Yet" took to the New York Ballroom stage for an evening set of classics from his prodigious career in music.

The 78-year-old Canadian is visiting Japan to be reunited with his Gretsch guitar that was stolen from a hotel in 1976.

Randy told NPR that the guitar was stolen after his road manager had put the guitar in a hotel room and it got nabbed.

"The road manager said, I'm going to take your guitar, check out of the hotel and come back and pick you guys up," Bachman said. "He took the guitar, he put it in a hotel room and in five minutes it was gone."

According to the Japanese media, the Gretsch was eventually sold to a guitar trader from Japan where Takeshi, a musician who writes for Japanese pop bands, purchased it in 2014 from a Tokyo guitar shop. In 2020, a longtime fan and Internet sleuth from British Columbia named William Long heard Bachman's story and decided to try to hunt down the instrument using facial recognition technology. He found it in a YouTube video featuring Takeshi playing the guitar, the Washington Post reported.

Bachman is best known for his songs with THE GUESS WHO and BACHMAN-TURNER OVERDRIVE.

The Tokyo American Club show was filmed as part of documentary about Bachman's long-lost 1957 Gretsch 6120 guitar.

"Takin' Care Of Business" is a song written by Bachman and first recorded by BACHMAN–TURNER OVERDRIVE for the band's 1973 album "Bachman–Turner Overdrive II". The lead vocal is sung by Randy.