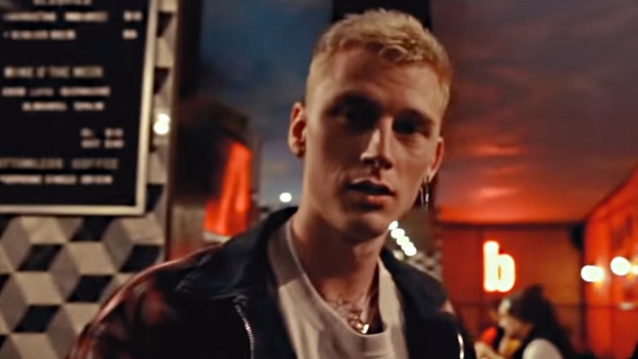 "The Dirt", which will premiere on March 22, was helmed by "Jackass Presents: Bad Grandpa" director Jeff Tremaine. It was picked up by Netflix after being previously developed at Focus Features and before that at Paramount.

Asked how he got the part, Machine Gun Kelly said: "Oh, my God, that was, I think, a six-audition process. The first two, I was auditioning for [bassist] Nikki Sixx, and then the last four for Tommy Lee, over the course of two and a half years."

According to the rapper, he first met Lee when they "partied together in Atlanta — we were on the same show together. And I have his 'Mayhem' tattoo." He described Tommy as "like the puppy dog of the group. He makes mistakes, but you kind of love him more when he's making mistakes."

Machine Gun Kelly, who first read "The Dirt" when he was 13 ("It was my Bible," he claimed),said that his reaction to the darker moments in the book has changed in the ensuing 15 years.

"When you're 13, you don't really understand problems too much, so you're just looking at all the things that glitter," he explained. "It wasn't until we were on set and doing these scenes that we were like, 'Whoa, this is dark. What are people going to think about this?' But there's something about the truth in that book — the fact that you do fall in love with these people [who] then do this giant nose dive into this dark place."

"The Dirt" reportedly also stars Daniel Webber ("The Punisher") as singer Vince Neil, Douglas Booth as Sixx and Iwan Rheon ("Game Of Thrones") as guitarist Mick Mars. Playing rock and roll legend Ozzy Osbourne in the film is actor-comedian Tony Cavalero, while Rebekah Graf ("The Amityville Murders", "Lycan") is playing actress Heather Locklear, ex-wife of Tommy Lee. The film is being produced by LBI Entertainment's Julie Yorn and Rick Yorn, along with Erik Olsen and Amanda Adelson, who wrote the script.

MÖTLEY CRÜE recently recorded four new songs for "The Dirt" movie. Sixx described the recordings as "real and raw. Everybody is playing like mad and the songs crush," he wrote on Twitter. "[Producer] Bob Rock brought the sounds. Plus we have a surprise that will confirm that we're outta our minds."