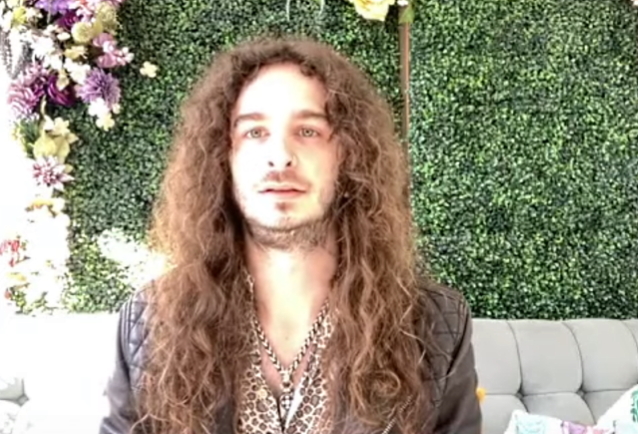 During an appearance on a video podcast hosted by Todd Kerns, the bassist of SLASH FEATURING MYLES KENNEDY AND THE CONSPIRATORS, RATT guitarist Jordan Ziff was asked if the band has found a replacement for guitarist Chris Sanders, who left RATT in early 2020. "As of right now, it's still a four-piece," he replied. "But we will definitely add somebody, when we find the guy that totally fits the bill to do it."

According to Ziff, RATT was planning to play several gigs early last year as a four-piece following Sanders's exit from the group, "but we only did one show where I was the only guitar player in the band. And it was in February. And then that was it. And then COVID [hit]."

Asked if there are any plans for RATT to writing or record new music in the coming months, Ziff said: "That will happen. It's just a matter of time. Stephen's [Pearcy, RATT singer] doing some solo stuff right now. When things line up, I'm all game to do that."

In February 2020, Chris released a statement to Mike Gaube's Headbangers announcing his retirement from the music industry.

He wrote: "At the beginning of the year, I sent an email to [RATT's] management that I would not be renewing my contract for 2020. After playing music in some form for 25 years, I've retired from the industry."

Sanders's statement came just one day after Pearcy said in a radio interview that Chris was "missing in action."

Speaking with Cameron Buchholtz of the KATT Rock 100.5 FM radio station, the singer said about Chris: He's a little M.I.A. right now, so… It's not concerning at all — it's not a big issue."

Last month, Pearcy told SiriusXM's "Trunk Nation With Eddie Trunk" that he is open to the idea of making a new RATT album with all the surviving members of the band's classic lineup. Pearcy also revealed that he is back on speaking terms with drummer Bobby Blotzer, who led his own version of RATT for a couple of years beginning in late 2015 before becoming embroiled in a legal battle with the singer, DeMartini and Croucier over the rights to the band's name.