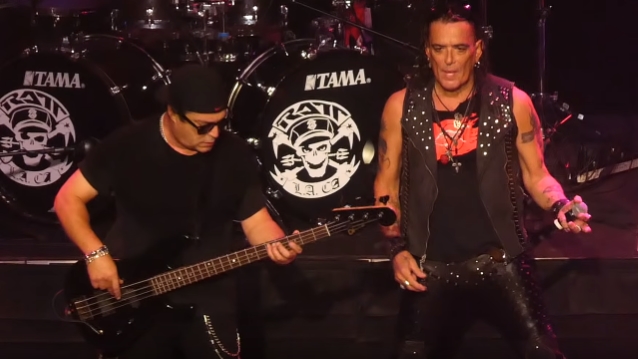 According to the Northern California Record, a federal court has dismissed counterclaims from drummer Bobby Blotzer in a lawsuit related to the ownership and use of the RATT trademark.

A judgment was entered in favor of RATT's general partnership — which includes RATT's fellow original members Stephen Pearcy (vocals),Juan Croucier (bass) — in a trademark infringement lawsuit filed against the corporation WBS Inc. and Blotzer, who is a partnership founding member and former WBS president.

The RATT partnership, a 1985 agreement, gave equal shares to the band's the original members, including guitarists Warren DeMartini and Robbin Crosby, the latter of whom died in 2002. WBS — short for Warren, Bobby and Stephen — was created in 1997 to handle licensing and other aspects of the partnership business, after Croucier declined to reunite with his bandmates following a breakup. However, in November 2016, U.S. District Judge Dean D. Pregerson ruled that, per the band's partnership agreement, Croucier could only be fired with unanimous consent from the other members, which had not been granted by DeMartini. In March 2018, summary judgment was entered against WBS in another case it brought, again finding that the RATT marks were never properly transferred to WBS from the partnership.

In May 2018, the partnership filed a lawsuit against WBS and Blotzer, claiming the drummer "orchestrated" a takeover of WBS, which purported to own the RATT trademarks. The partnership also accused Blotzer of claiming "the exclusive right to tour as RATT and renamed his cover band 'RATT,'" and said WBS and Blotzer were guilty of trademark infringement because they allegedly used the RATT name without permission.

"In November 2016, the other RATT Partners unanimously agreed to expel Blotzer from the Partnership," the partnership wrote in its lawsuit. "Under the Agreement, an expelled partner has no further rights in the Marks and may only refer to himself as 'formerly of RATT.'

"Despite having no rights in the Marks, Blotzer and WBS continued to tour and promote Blotzer's cover band as RATT and on information and belief, continued to sell and/or cause RATT merchandise to be sold," the lawsuit added.

In response, WBS and Blotzer filed counterclaims, accusing the partnership of false advertising and arguing that the trademarks were subject to common law treatment.

In his November 19 ruling, Pregerson wrote: "This case, like the prior cases, revolves around ownership of RATT trademarks. [WBS and Blotzer's] entire argument is predicated on the assertion that, notwithstanding, and indeed as a result of, the fact that the RATT Partnership never assigned the RATT trademarks to WBS, WBS nevertheless enjoys common law ownership of the marks.

"[WBS and Blotzer's] theory, unsupported by any authority, appears to be that because the RATT Partnership's purported assignment of the marks to WBS was invalid, the RATT Partnership always owned, but then abandoned, the registered marks, which WBS then acquired through use. Although [WBS and Blotzer] seek to highlight disputes of fact regarding these assertions, the veracity and plausibility of those allegations is not relevant to the preclusion analysis. The pertinent question is whether the current dispute over ownership was actually litigated and resolved in the prior actions."

Pregerson continued: "The answer is yes. Although [WBS and Blotzer] put forth a new, common law-based theory about why WBS owns the RATT marks, the question whether WBS or the RATT Partnership owns the marks was already litigated, and resolved, in [previous lawsuits filed by WBS against] Croucier and Pearcy. [WBS and Blotzer] had a full and fair opportunity to raise that theory in the prior litigation. Indeed, WBS's submissions in the prior litigation reveal that WBS itself understood common law rights to be at issue even then. WBS' Complaint in [the earlier] Croucier [case] explicitly alleged that '[t]he Marks include the Federal registered trademarks as well as the common law rights.' WBS also moved for summary judgment on all of its trademark causes of action, including 'common law false designation of origin… But, since all causes of action stem from the same elements, [WBS] will only argue and refer to ‘trademark infringement.'' [WBS and Blotzer] cannot colorably argue that the prior litigation was somehow limited to registered trademarks, independent of any common law ownership rights.

"Although in the instant suit, [WBS and Blotzer] attempt to raise a new theory of ownership of the RATT marks, the issue of trademark ownership, even under common law theories, could have been, and was, litigated to final judgment in the prior actions. [WBS and Blotzer] may not relitigate that question again here." 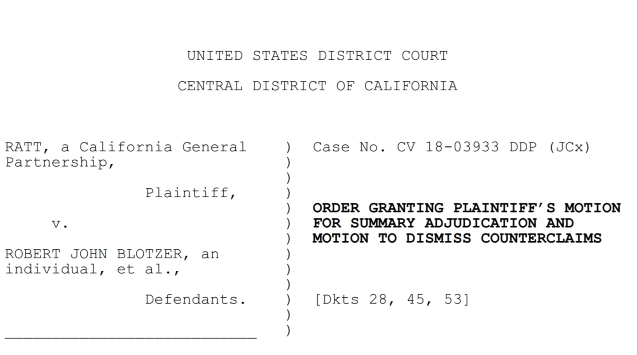