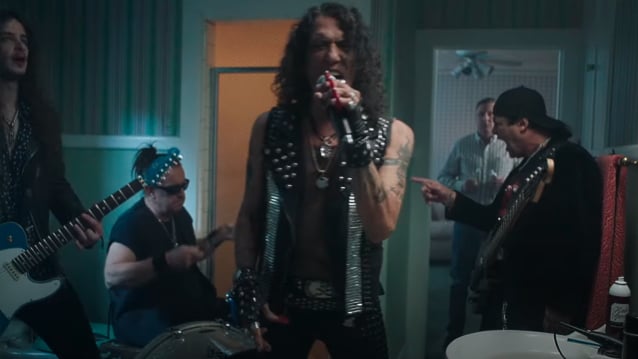 RATT's Commercial For GEICO Has Already Aired More Than 10,000 Times

According to Variety, RATT's recent TV commercial for the Geico insurance company has amassed more than 8.7 million views on YouTube, and has aired north of 10,000 times since April 13, with an estimated media spend of $21.1 million.

The 40-second spot — featuring the current lineup of RATT playing the band's classic hit "Round And Round" — is part of Geico's "Bundling Made Easy" campaign, which reminds people that bundling your home and car insurance is easy with Geico and helps you save money.

Last month, RATT singer Stephen Pearcy spoke to SiriusXM's "Trunk Nation" about how the commercial came about. He said: "That was a whole lot of fun there. Our manager instigated that. We re-recorded the song at Juan's [Croucier, bass] place and gave it a gritty kind of a twist. And it's amazing. It was fun to do. It's perfect timing — the fact that we can get out there while everybody's inside. They can see RATT at least play part of 'Round And Round'. [Laughs]"

According to All TV Spots, the commercial opens with a married couple" — played by Scott Michael Morgan and Jennifer Bartels — praising their new home, but admitting they do have a problem, too. "The new house is amazing. So much character. Original crown molding, walk-in closets," they say before mentioning the problem they have, namely a "rat problem." However, it turns out the issue comes from the "concerts" held by the heavy metal rock band RATT, whose frontman is their neighbor. "At least Geico makes bundling our home and car insurance easy. It does help us save," the couple add, while juxtaposed footage features RATT performing "Round And Round".

The commercial ends with another shot of RATT singing in the apartment and with the voiceover urging viewers to visit the company's web site.

"Round And Round" is featured on RATT's debut album, "Out Of The Cellar", which came out in 1984 via Atlantic Records. The accompanying music video starred Hollywood legend Milton Berle (whose brother Marshall managed the group) and became a staple of MTV, propelling "Out Of The Cellar" to triple-platinum status.