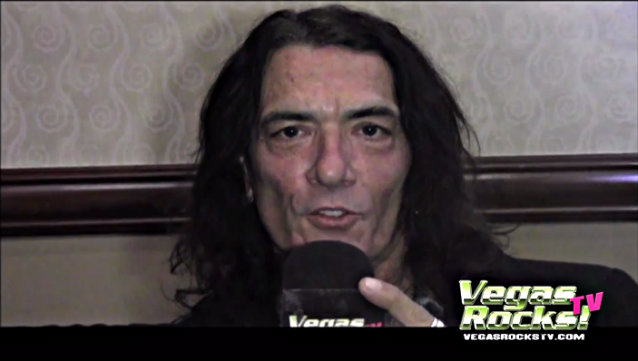 Alice Cooper, Dee Snider (TWISTED SISTER),Vince Neil (MÖTLEY CRÜE),Tom Keifer (CINDERELLA),Rob Zombie, Stephen Pearcy (RATT) and all four members of KISS are among the musicians who performed on December 5 at a concert and live auction to raise money for the Brennan Rock & Roll Academy at The Orleans Arena in Las Vegas, Nevada. They played with '80s and '90s cover band HAIRBALL to help the future of rock 'n' roll; the children.

A backstage interview with Pearcy conducted by Sally Steele, publisher of Vegas Rocks! Magazine, can be seen below.

Speaking to "The Blairing Out With Eric Blair Show" this past January, RATT drummer Bobby Blotzer stated about the band's current status: "We're getting ready to do a new record with Brian Howes, this producer that produced NICKELBACK, we have new management, we have Juan Croucier [bass] back in the band, and we're gonna tour and hopefully get along and be happy, which would be amazing."

Regarding the songwriting process for the new RATT album, Blotzer said: "Everybody's been writing and everybody has a backlog of material. So we'll just get in like we did with the last record, and there's, like, boom, 35 songs, and then we'll let the producer go, 'OK, let's work these up.' He's got the final say on that. I mean, the last record we worked up in two weeks."

He continued: "I don't think [the new RATT CD is] gonna be super overproduced. I think we're trying to do something new, and really, on all levels of RATT — have everything come out and be a new RATT. [We'll still have] classic-sounding songs, but it's gonna be, obviously, a twist in the production with the way that [Brian] produces."

Original RATT bassist Juan Croucier rejoined the Californian rockers for their show at the M3 Rock Festival on May 12, 2012 at the Merriweather Post Pavilion in Columbia, Maryland and he has been performing with them ever since.