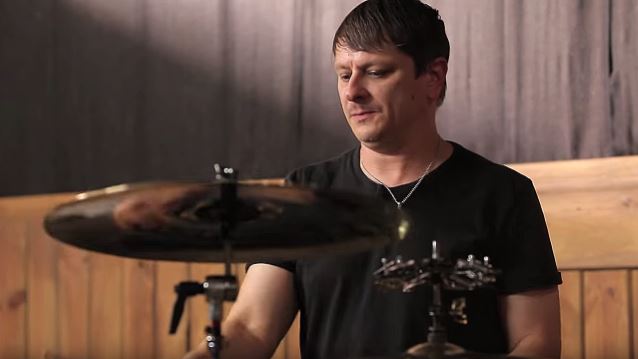 KORN drummer Ray Luzier said in a new interview with the Las Vegas Sun that the band is working on a "really heavy and ruthless" follow-up to KORN's 2013 album "The Paradigm Shift" for a 2016 release. He said: "Everyone always likes to say this is the best record they've been working on, but I just came from the studio. We have a long way to go, but every time I hear it, I get chills. I love 'The Paradigm Shift', I'm a huge fan of that record, but I didn't get chills every time I heard that record. This I literally get goose bumps, and that's a great thing because that's what you want as an artist to get those kinds of feelings."

He continued: "Right now it's really heavy and ruthless, which is my favorite. Who knows what's going to happen later. Heavy is definitely a good word, but it's too early to tell everything right now, so I'll just leave it at that."

Asked how the synergy of the band has evolved over the nine years that he has been a member of KORN, Luzier responded: "We're in a much better place right now, we're all about it, it's all about families, it's all about music. There's no substance, there's nothing in the way, no drama. It's always been that way for me. I've never had any drug problems. It's always been about the music for me, so it's really important I play in a band like that."

KORN guitarist James "Munky" Shaffer said in a recent interview with Billboard that the band is about a third of the way through the writing process for its next CD. He said: "We went in, we wrote about 20 songs and about 10 of those we've kept and made better. So I think we're gonna need to go back in and write another batch of songs and then fine-tune those into maybe four, five really great songs. There's no rush, which feels great."

A producer has already been selected for KORN's 12th studio effort, but Shaffer said that the band "is gonna wait a couple more weeks before we announce that."

Welch added that touring with SLIPKNOT last year inspired KORN to get back to a heavier sound, saying, "I think it sparked and reminded everybody in the band what KORN started out to be."

KORN kicked off a fall North American tour on October 1 in Chicago. The band is performing its self-titled 1994 debut in its entirety at every stop, finishing up on October 30 in Oakland.