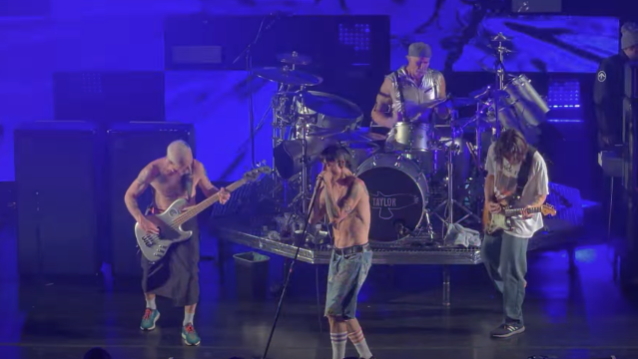 RED HOT CHILLI PEPPERS have canceled their show in Glasgow due to an unspecified "illness."

The band, which consists of singer Anthony Kiedis, bassist Flea, drummer Chad Smith and guitarist John Frusciante, was set to play at Bellahouston Park on Friday (July 1) as part of its world tour.

Early Friday morning, RED HOT CHILLI PEPPERS released the following statement via social media: "Due to illness RHCP will not be able to perform in Glasgow tonight July 1st. We are working on ways to reschedule this show. Please hold onto your tickets and wait for an update soon. RHCP love Scotland and are deeply disappointed not to be able to perform the show. Thank you for your patience and understanding."

RED HOT CHILI PEPPERS have been touring in support of their 12th studio album, "Unlimited Love", which was released on April 1.

The band launched the trek on June 4 at the Estadio La Cartuja in Seville.

"Unlimited Love" sold 97,500 equivalent album units in the U.S. in its first week of release to land at position No. 1 on the Billboard 200 chart. It marks the band's first chart-topping effort since 2006's "Stadium Arcadium".

RED HOT CHILI PEPPERS's first new LP with Frusciante since "Stadium Arcadium" was once again produced by Rick Rubin who previously worked on "Blood Sugar Sex Magik" (1991),"Californication" (1999),"By The Way" (2002) and the aforementioned "Stadium Arcadium".