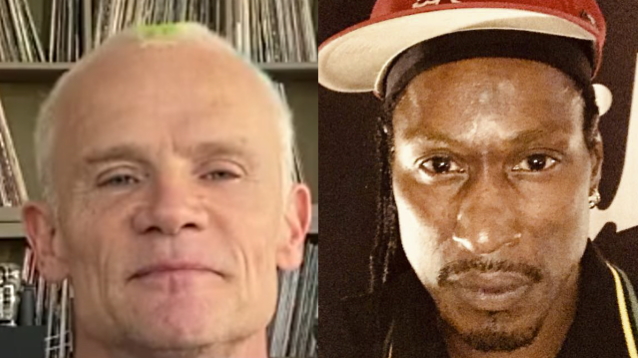 RED HOT CHILI PEPPERS' FLEA Pays Tribute To D.H. PELIGRO: 'I Love You With All My Heart'

RED HOT CHILI PEPPERS bassist Flea has paid tribute to the band's former drummer D.H. Peligro, who has died at the age of 63.

Peligro's passing was announced earlier today (Saturday, October 28) by the legendary punk band DEAD KENNEDYS, with whom the drummer had played, on and off, for more than four decades. According to the DEAD KENNEDYS, Peligro — whose real name was Darren Henley — died at his Los Angeles home from trauma to his head from an accidental fall.

Flea took to his social media to write: "My dear friend, my brother I miss you so much. I'm devastated today, a river of tears, but all my life I will treasure every second.

"The first time I saw you play with the DK's in '81 you blew my mind. The power, the soul, the recklessness. You became my beloved friend, so many times of every kind. We had so much fun, so much joy, having each other's backs.

"I love you with all my heart. You are the truest rocker, and a crucial part of RHCP history. D H P in the place to be, you live forever in our hearts, you wild man, you bringer of joy, you giant hearted man. I will always honor you. Rest In Peace and freedom from all that restrained you."

Peligro joined RED HOT CHILI PEPPERS following founding drummer Jack Irons's exit but was fired from the band after only two months over his drug problems. Peligro was replaced by Chad Smith, who has played with RED HOT CHILI PEPPERS ever since. Three songs co-written by Peligro — "Knock Me Down", "Sexy Mexican Maid" and "Taste The Pain" — are featured on the CHILI PEPPERS' 1989 LP "Mother's Milk".

In 2001, DEAD KENNEDYS, along with Peligro, reunited without former frontman and primary songwriter Jello Biafra following a civil fraud complaint against Biafra, accusing him of withholding royalties. DR. KNOW singer Brandon Cruz would replace Biafra on vocals and they played under the name DK KENNEDYS for a few concerts, but later reverted to DEAD KENNEDYS permanently.