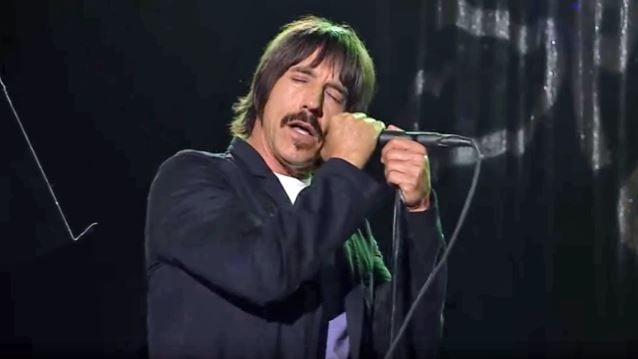 According to The Pulse Of Radio, RED HOT CHILI PEPPERS frontman Anthony Kiedis said in an interview with Australian TV program "Sunday Night" that drugs did not play a role in the illness that put him in the hospital and forced the band to cancel two shows earlier this month. Asked about rumors that he had relapsed into abusing drugs, Kiedis replied: "I felt more care than anything else. I got a lot of messages in the mail; it just seemed like people did care. My friends called, people I hadn't spoken to for years called, but what people assume or think about using, I could care less. It didn't faze me at all."

He added: "I happen to love being sober, I also loved being wasted at times. Being sober for me is a pleasure, I get a lot of joy out of it; it works for me. I get to surf, I get to hang out with my son, I get to play music, I get to be okay."

Kiedis, who got sober many years ago, told The Pulse Of Radio a while back that it's a mistake to associate drug addiction only with artists. "My experience with drug addiction and alcoholism and stuff like that is, it really, you know, it isn't specific to musicians or bankers or lawyers or doctors or housewives or kids or adults or whatever," he said. "It's kind of a condition that affects everybody equally. It's kind of an equal opportunity disease, if you will."

Kiedis also described to "Sunday Night" what happened the night he got sick saying: "This was knocking me off my feet, and I was white as a ghost, and my whole gut section just seized up, and I was kind of falling to my knees in pain, so I got taken by a friend to the hospital from the gig."

The singer blamed an intestinal virus plus complications from old scar tissue for his condition, musing: "Maybe there was a reason for me to get sick, so I can get stronger than I was before."

The CHILI PEPPERS' eleventh studio effort, titled "The Getaway", will be released on June 17. The band has already issued the title track and the first official single, "Dark Necessities".