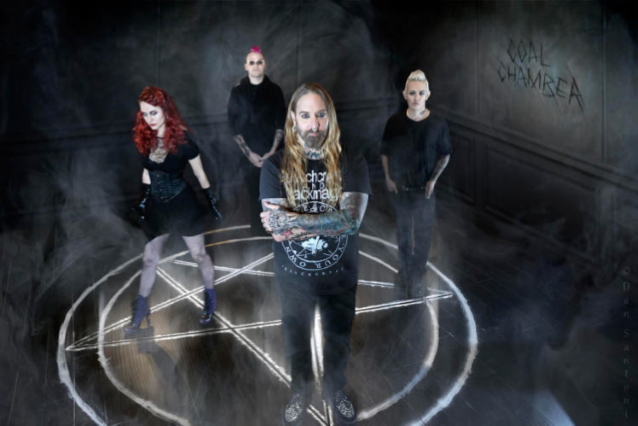 The reunited COAL CHAMBER will perform at next year's edition of the Blue Ridge Rock Festival, set to take place September 7-10, 2023 in Alton, Virginia. Also set to appear at the event are TAPROOT (reunion show),COLD ("Year Of The Spider" 20th-anniversary show),ADEMA, SENSES FAIL, WOE, IS ME (original lineup reunion) and FINGER ELEVEN.

As previously reported, COAL CHAMBER will also perform at next year's Sick New World festival in Las Vegas, Nevada. The band, which hasn't performed live since 2015, will join SYSTEM OF A DOWN, INCUBUS, KORN, EVANESCENCEDEFTONES and many others at the one-day event, which will be held on Saturday, May 13, 2023 at the Las Vegas Festival Grounds.

Guitarist Miguel "Meegs" Rascón wrote: "My brothers and sister. Back together, w all the love in the world. Cant wait to play for all the fans who have been there for us and loyal. We love u all! #coalchamber #sicknewworld".

Drummer Mike Cox wrote: "GOOD LORD what a line up!!!

"Well this is definitely something I thought I would never post again in my life!!! I am rarely on social media anymore as it is…..

"Quick recap as it will be therapeutic for me !!! After our last tours in 2015 I was coming off stage very depressed and wanting to be home with my young son. I was missing a lot and it started to really get to me. I made the decision , that if we stop again it was my last time ever playing again. After our last show ,it was over … and that's what I did. I completely retired from music and began focusing on my family life and raising our son . With the tremendous support and encouragement from my wife we moved to a new city …..Bought a new house ,and my construction company is booming…. Everything was exactly where we wanted it to be . After YEARS of hard work , therapy, sobriety , 2 elbow surgeries, I found extreme peace with not being a musician anymore.

"Over the years I kept in contact with @dezfafara and I feel like for the first time in 25 years we actually became real friends . Both our families went through A LOT over the past years and we were actually there for each other . We actually listen to each other and that means more than any band at this point in my life . That slowly changed the conversation of starting to play again… and here we are!!!

"I really thought about this decision for a long time with my family and what it meant to jump back in and this was a family decision. Our son is older now and always asks about what I used to do… now I can just show him all the crazy hardcore COAL CHAMBER fans we have out there!!!. It's an exciting time for us all the future looks bright!

"As for @meegsrascon ….. I think I have talked to him almost everyday of my life for the past 25 years….can't get rid of this fool!!!

"I want to thank everyone who helped me with this decision as it was not a easy one to make. Thank you to @theoraclemgmt for all of the extremely hard work and putting things in black and white and not bullshitting me like the music industry is so famous for. Also thanks to @nadjapeulen for being a part of this whacky journey we have put her through. I love all of you!!!!"

COAL CHAMBER existed for ten years before disbanding in 2003 to pursue other musical projects. They reunited in 2011 for touring purposes but it wasn't until 2014 that the band began work on a new studio album of original material, the aforementioned critically acclaimed "Rivals". Several months of touring activity followed before Dez returned to DEVILDRIVER to make a new record, 2016's "Trust No One".

We are honored to welcome the East Coast Reunion performance from COAL CHAMBER at Blue Ridge Rock Festival 2023. The band is widely considered to be one of the bands that defined the Nu Metal sound. Led by legendary frontman Dez Fafara, Coal Chamber released their debut album in 1997, earning Gold status and producing heavy classics like "Loco", "Big Truck", and "Sway". The band followed that release with their sophomore record that charted #1 and included an iconic collaboration with Ozzy Osbourne on their hit "Shock the Monkey".

🤘 𝐅𝐀𝐍 𝐅𝐎𝐂𝐔𝐒𝐄𝐃 𝐏𝐑𝐈𝐂𝐈𝐍𝐆: You voted that pricing is a MAJOR factor if you are able to attend or not. So for 2023 we have lowered our GA Ticket & Camping Prices AND launched a 6 Month Payment Plan option on ANY purchase to Blue Ridge! Pay just 10% down at checkout - then comfortably pay for the rest over the course of several months for NO added cost! BlueRidgeRockFest.com