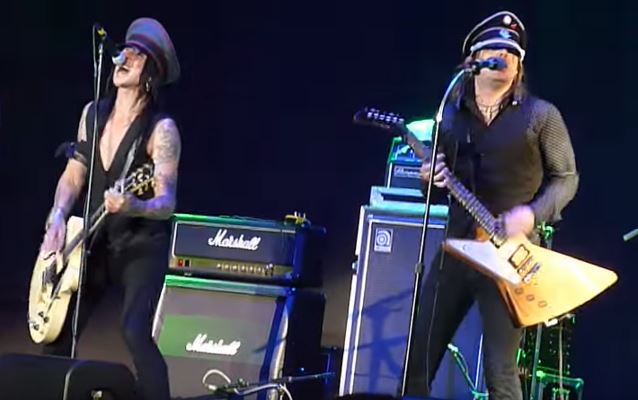 The original lineup of the Swedish garage rock band THE HELLACOPTERS will celebrate the twentieth anniversary of the release of its debut album, "Supershitty To The Max!", with an appearance at this year's edition of the Sweden Rock Festival on June 10 in Sölvesborg, Sweden. One week earlier, on June 3, the band will release an exclusive vinyl 12-inch single containing "My Mephistophelean Creed" and "Don't Stop Now", two tracks written by the band back in 1996 but never properly recorded until now.

Laid down at Nicke Andersson's Honk Palace studio earlier this year, "My Mephistophelean Creed" and "Don't Stop Now" show a band which knows exactly what it's all about — a band that has unshakable faith in creating magic, pushing boundaries and challenging themselves.

Carl Schewen of Sound Pollution puts it this way: "Ouff! When I first heard that THE HELLACOPTERS will be celebrating 'Supershitty To The Max!' at the Sweden Rock Festival, I thought someone was pulling my leg, but it turned out to be true after all! Later on when I was asked to put out this 12-inch I was as psyched as I was 20 years ago when Nicke first asked me if I was interested in releasing their first album."