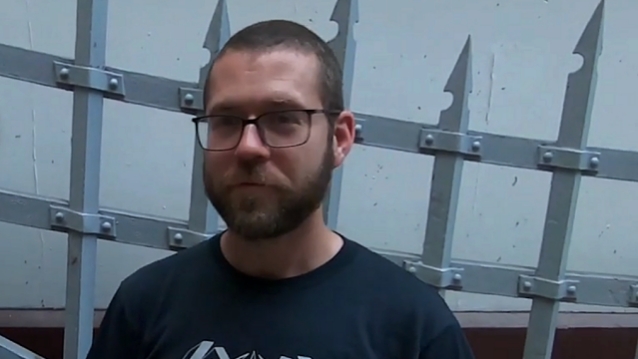 REVOCATION Frontman On 'The Outer Ones' Album: 'It Certainly Opened Up A Lot Of Doors For Us'

Lady Obscure recently conducted an interview with vocalist/guitarist Dave Davidson of American technical thrashers REVOCATION. You can watch the entire chat below. A few excerpts follow (transcribed by BLABBERMOUTH.NET).

On whether it was a conscious decision to blend so many styles into REVOCATION's style:

Dave: "I think it's more unconscious. I listen to so many different genres of metal and music in general. All those different influences kind of get filtered through my brain somehow. I guess the result is REVOCATION."

On how he integrates melody and catchy riffs into the oftentimes technical nature of REVOCATION's music:

Dave: "I don't know really what the secret is. I think, again, it goes back to something that comes out naturally. Don't get me wrong: I definitely labor a lot over my music. I try to think about dynamics when I'm writing, so it's not just all on ten the whole time. I want there to be peaks and valleys, so they make the technical parts stand out more, and they might make the more melodic parts that much memorable; they might grab you more. To me, music is all about emotion, right? Whether it's aggression… there's just such a myriad of emotions that music can conjure up. I don't want to shy away from them. I really want to run toward that and embrace it. That's why I got into music in the first place because it moved me on an emotional level rather than a surface level, like 'Oh, wow. This is fast!' There's always a place for that, and I think speed, technicality — I like to try to use those as sort of colors in a color palate rather than sort of the be-all-end-all of what the ultimate goal is."

On how his Berklee College Of Music education influenced his career:

Dave: "Hopefully all that training comes in a subconscious way as well. One of the things they tell you at Berklee when graduating is 'Forget everything we just taught you. Go make music.' If you keep too much of the intellectual side of that too much at the forefront, you might run the risk of sounding sterile or doing things by the book. All the best musicians — what they teach you, they all threw the rulebook out at some point in their career, and that's what allowed them to take music to the next level, whether it was classical composers, jazz artists. You start with a base level of understanding and certain rules that you work within, then you start to push the boundaries of that, then pretty soon, that becomes a new rule, then you change it again, then that becomes a new rule. I think not being afraid to kind of push the envelope is what makes musicians memorable and why we still talk about someone like Beethoven to this day."

On the reaction to their latest studio album, "The Outer Ones":

Dave: "The reaction has been really positive. Across the board, it seems like it was probably our best-received record for critics and fans alike. It certainly opened up a lot of doors for us. I feel like every record, we get to the next level or climb up another rung of the ladder, but with 'The Outer Ones', I feel like we jumped up several rungs."

On the differences between American and European audiences:

Dave: "I see a difference between audiences — it could be from state to state, or country to country. There are a lot of different scenes. There's always a lot of overlap between certain crowds and stuff like that. I think people react differently depending on what part of the world you're in. I guess the more you play, hopefully you kind of level it out. The ultimate goal is to have people losing their minds no matter where you play. I will say France has always been super awesome to us over the years. We've always had great crowds in France. We just played Hellfest and that was amazing. I think anywhere that has an open-mindedness and there's already a great sort of culture that's already fostered there for the artist, we tend to really thrive on that environment. Then sometimes you play a random place that you wouldn't think has a great scene, then tons of people turn out. It's impossible to pinpoint or guess what places are going to have the best crowd or this or that, because it's ever-evolving, especially with the Internet, because ideas are able to be exchanged so quickly now. One place could be more isolated and cut off could become a huge hub of all different bands. I think, ultimately, the strength of the local scene is what really contributes to how good, whether it's an art scene or music scene — what are the people that are living there contributing to that local scene, and how are they propping it up and making people care? Tours come through every so often, but there are bands who are continually playing and making a vibe, and make you want to go out to shows, so this will make those touring bands have that much of a better show."

"The Outer Ones" was released last September via Metal Blade Records.

REVOCATION will team up with VOIVOD for a North American tour this fall. The tour kicks off September 12 in Quebec City and wraps October 12 in Brooklyn.