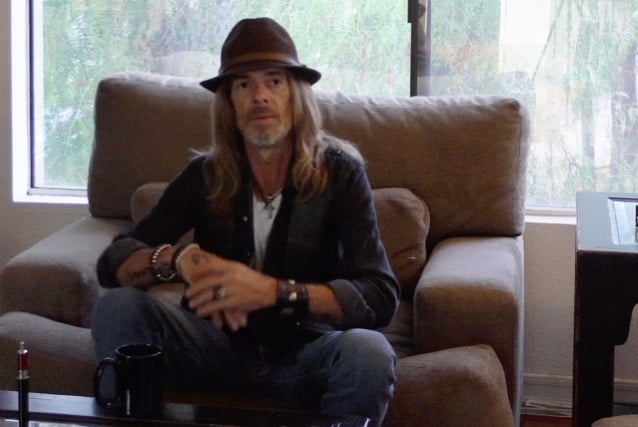 REX BROWN Has Been 'Devastated, Saddened, And Shaken, Almost Beyond Words' By VINNIE PAUL's Passing

Former PANTERA bassist Rex Brown has paid tribute to Vinnie Paul Abbott in a lengthy statement released to Rolling Stone. In his piece, Brown wrote that Vinnie was his "longtime brother" who "made an incredible mark on the world."

Brown, who first met Vinnie when the former was 15 and they played together in a high school band, wrote in part: "There were a lot of great metal drummers who Vinnie was influenced by, but once he got behind the kit, every single one of them had to take a look at what Vinnie Paul, the Brick Wall, was doing. He changed the game. He was the original for his generation, a generation that’s still going."

Brown continued: "Vinnie was also a hell of an engineer. He knew the ins and outs of any board. He learned so young from his dad (country musician Jerry Abbott),who was an experienced engineer. He could get behind the board and do anything. He just had it."

He added: "When I look back, no matter what, I can honestly say that there were far more ups than downs with PANTERA. It was uncanny the way we played together. Once we got into that state, with that black look in our eyes, we were fucking dangerous, man... Those boys grew up wanting to be great like Alex and Eddie Van Halen. And you know what? They did it."

Brown concluded: "The best way to honor Vinnie is to celebrate his life. He approached drumming, and friendship, with his own brand of perfection. We must remember the great times we shared with him. Rest in peace, Vinnie, and give Dime a big ole' fashioned Texas style hug from all of us. You made an incredible mark on the world and you were taken from us way too soon."

You can read the full piece at the Rolling Stone web site.

Vinnie's brother, guitarist "Dimebag" Darrell Abbott, was shot dead by a disturbed gunman while he and Vinnie were playing a Columbus, Ohio nightclub in December 2004 with their post-PANTERA act DAMAGEPLAN.

Vinnie passed away at his Las Vegas home on June 22 in his sleep. He was buried next to his mother and brother last weekend in Arlington, Texas.

Vinnie's death came about a year after he slammed Rex's memoir as "a bunch of mythology." Asked about the way he was depicted in Brown's 2013 book, "Official Truth, 101 Proof: The Inside Story Of Pantera", in which the former PANTERA bassist referred to Vinnie as "a strange person" who "was always all about the 'party, party, party'" but "only got laid maybe one out of ten times," the drummer told the "Rover's Morning Glory" syndicated radio show: "All I can say is that… I'll refer to Philip's [Anselmo, former PANTERA singer] comment about Rex's book. A bunch of mythology, man. We don't know where he came up with all this. More power to him, man."