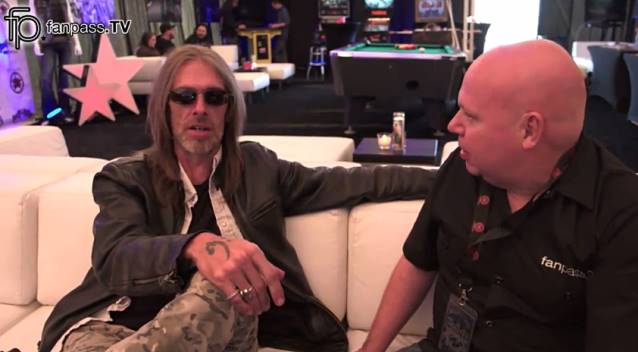 Matt Pinfield of Fanpass conducted an interview with former PANTERA/DOWN and current KILL DEVIL HILL bassist Rex Brown at this year's Rock On The Range festival, which was held May 16-18 at the Columbus Crew Stadium in Columbus, Ohio. You can now watch the chat below.

Speaking about KILL DEVIL HILL's decision to include a cover of the PANTERA classic "Mouth For War" in the band's set, Brown said: "For the longest time, I wanted KILL DEVIL HILL to ride on its own merit, you know, so for the longest time, I didn't wanna play any cover tunes. And I thought, 'You know, that's part of my past. Let's go ahead [and play it].' And so that song, it kind of fits really nice with the nice we have in our repertoire."

In a separate interview with the Boise, Idaho radio station 100.3 The X Rocks, Brown spoke about what it was like being joined at Rock On The Range by his former PANTERA bandmate Philip Anselmo on stage to to perform the PANTERA classic "Mouth For War" with KILL DEVIL HILL."I've never seen Anselmo up before 1 o'clock in the afternoon, and there he was," Rex said. "He came up. We had 'Mouth For War' in the set anyway. I said, 'Dude, you wanna sing?' He said, 'Yup.' And then we went. And fucking, so it is." Bragg added: "I was awesome, actually, for me. I mean, having Phil come out and sing was great. I've been listening to PANTERA since I was a kid, and I'm the biggest PANTERA fan there is."

"I'm really excited about coming on board with KILL DEVIL HILL," said Kelly. "I've been a fan since their debut and have known the guys for a long time. It's also clear that I have some really big shoes to fill. I'm ready for that challenge as I prepare for KILL DEVIL HILL's next chapter. This is gonna be a blast!"

KILL DEVIL HILL played their first shows with Kelly behind the kit April 4-6, three warm-up shows before embarking on an Australian run with KILLSWITCH ENGAGE.